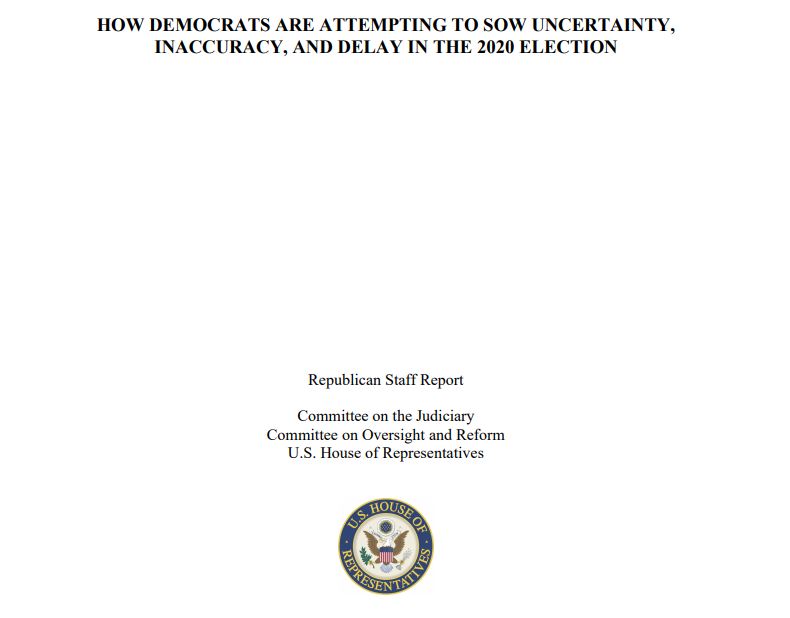 Democrats are seeking to change state election laws and procedures at the last minute to advantage themselves in the 2020 election cycle. These late changes will only increase the likelihood for potential election-related crime and errors, and put at risk the integrity of the nation’s electoral process. The result of these Democrat initiatives could be lingering uncertainty about the results of the elections for several days or weeks after Election Day. If they are successful, Democrats could be sowing the seeds for an unprecedented constitutional crisis.

Typical elections in the United States consist primarily of in-person voting, for which states have established procedures, including basic safeguards to ensure that the person voting is an eligible voter in the proper jurisdiction. This year, however, some Democrat-run states have belatedly changed election administration procedures and moved to all-mail balloting—meaning that as many as 44 million total ballots will be mass-mailed to registered voters with no assurance the ballots reach the right person. This expansive and late shift to all-mail voting will create conditions ripe for election crime, errors, inaccuracy, and delay.

All-mail balloting—not to be confused with time-tested and limited absentee balloting— raises serious questions about election integrity. To begin, states have notoriously inaccurate voter registration lists—one estimate suggests that voter registration rates exceed 100 percent of the eligible populations in 378 counties across the United States. As the bipartisan Commission on Federal Election Reform found in 2005, voting by mail “remain[s] the largest source of potential voter fraud.”1 Even the New York Times and Washington Post have agreed. In October 2012, the Times reported that “votes cast by mail are less likely to be counted, more likely to be compromised and more likely to be contested than those cast in a voting booth.”2 That same month, in reporting about election crime, the Post explained that “[i]t may still be possible to steal an American election, if you know the right way to go about it.”3

Increasing reliance on the postal system only diminishes the integrity of the electoral process, as was evident this year in some states. In New York, where Governor Andrew Cuomo changed election procedures at the last minute, election officials discarded thousands of ballots for lack of postmarks in one congressional primary—delaying certification of the result for six weeks after the election. In a New Jersey municipal election, a last-minute shift to all-mail voting resulted in the post office still delivering ballots to election officials weeks after the election.

Democrats have already weaponized mail-in voting with the practice of “ballot harvesting,” in which political party operatives may solicit and collect ballots from mail-in voters. Ballot harvesting allowed Democrats to eek out victories in several congressional races in 2018 weeks after Election Day. As Democrats seek an increased reliance on mail-in ballots in 2020, the risks for weaponizing and abusing mail-in voting will only increase. Simply put, allmail voting around the country in 2020 will only exacerbate confusion, distrust, inaccuracy, and delay with the election results.