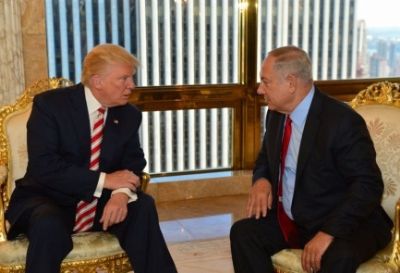 President-elect Donald Trump with Prime Minister Benjamin Netanyahu in New York, September 25, 2016
“Reports surfaced last week, before the Nov. 8 elections, that outgoing U.S. President Barack Obama could be preparing an unpleasant surprise for Israel, most likely in the form of calling on the United Nations Security Council to recognize a Palestinian state.

Now, with Donald Trump set to step into the White House, his aides say Obama should not even think about taking such steps…

‘On big, transformative issues where President Obama and President-elect Trump are not in alignment, I don’t think it’s in keeping with the spirit of the transition … to try to push through agenda items that are contrary to the president-elect’s positions,’ a Trump national security adviser told Politico on Thursday. ‘It’s not going to be just counterproductive, but it will also send mixed messages.’

He added: ‘The machinery of government is going to have to keep grinding as best it can. But Obama and his aides shouldn’t go seeking new adventures or pushing through policies that clearly don’t match Trump’s positions.’

Israel vehemently opposes any move by Obama to secure a U.N. Security Council resolution, which it views as hostile to Israeli interests, especially if he was to ask other world powers to embrace U.S.-drafted parameters for a two-state solution. One Israeli official, who asked not be identified, told Politico that any such move would represent a ‘dagger in the heart’ of the peace process — perhaps forever…”