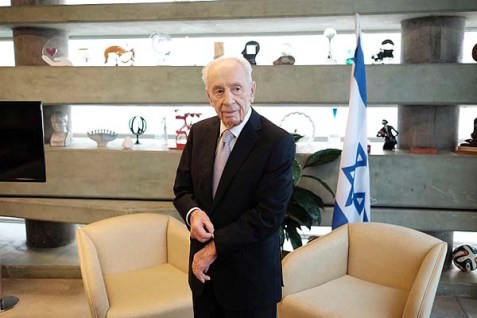 Shimon Peres, Israel’s ninth President, former Prime Minister, Nobel Prize winner, who served for nearly five decades as a member of the Knesset, passed away on Wednesday morning at age 93, following a severe stroke. He will be buried in a state funeral in the plot on Mt. Herzle dedicated to the nation’s great leaders. Peres was married to the late Sonia Peres who died in 2011. They had three children: Tsvia Walden, Yonatan (Yoni) Peres, and Nehemia (Chemi) Peres.

Peres was born on August 2, 1923 as Shimon Perski (a relative of Lauren Bacall a.k.a. Joan Persky), in Wiszniew, Poland (now Vishnyeva, Belarus). In 1934, together with his mother Sara and younger brother Gershon, they followed his father, who made aliyah in 1932. Peres grew up in Tel Aviv and studied at the Ben Shemen agricultural school. He met Sonia in Ben Shemen and they got married in 1945.

Peres became active in the Socialist youth movement Hanoar Haoved and in 1947 was recruited by Levy Eshkol to serve in the Hagana underground headquarters, alongside Eshkol and David Ben-Gurion. In 1953, after a stint as head of naval services in the newly formed IDF, Peres was appointed (at age 29) as Director of the Defense Ministry by Ben-Gurion.