The Iranian agenda is spelled out in Khamanei’s book, get nukes and scare the Jews out of Israel.

Obama Offers His ‘Deal or War’

Obama attacks his critics (guess who) as ignorant, deceptive and trying to pull a fast one on the American people.
By: Lori Lowenthal Marcus
Published: August 6th, 2015 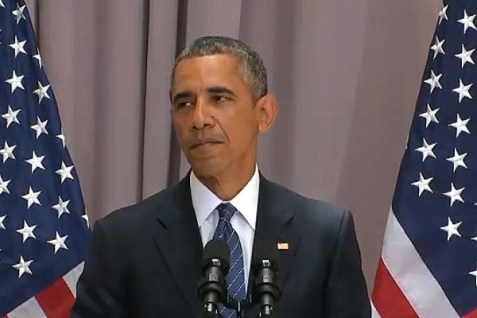 This critical period during which Congress is mulling over the nuclear deal made by U.S. negotiators and their P5+1 partners with Iran has turned into a hotly contested debate between those committed to preventing the deal from being approved and those who are desperate to ensure that it will be approved.

Yesterday, Aug. 4, Israel’s Prime Minister, Benjamin Netanyahu, spoke to thousands of Americans and explained why he believes the deal is a bad one. It boiled down to “Keep or Cheat.” However Iran decides to act under this agreement, it will attain nuclear threshold status.

Today President Barack Obama gave a midday televised speech from American University in Washington, D.C.. During the speech he ridiculed those who criticize the deal, and explained why, according to him, the choice is either the deal or war.

Obama sought to compare the current situation in which Iran is seen by many as threatening the U.S. and its closest allies, and perhaps the world, to the time in which the Soviet Union, also a supporter of terrorist proxies, was considered the global danger.

This comparison is useful because the tensions and stakes were similar, and the danger was handled through diplomacy, rather than a resort to war.

Of course, diplomacy is not a generic concept, and its success depends greatly on the diplomats involved and the deals they are able to strike.

This American administration and its negotiating team are not the teams who handled the Cuban Missile Crisis, nor have they woven treaties like the SALT and START Treaties. In fact, one clear red flagging difference is that the Joint Comprehensive Plan of Action is not a treaty, or at least is not being called one, with all the consequences that entails.