The rotten fruits of being in the EU.

It never ceases to amaze me that they choose Finland to set up their operations, though it’s one of the most expensive places in Europe to operate from. 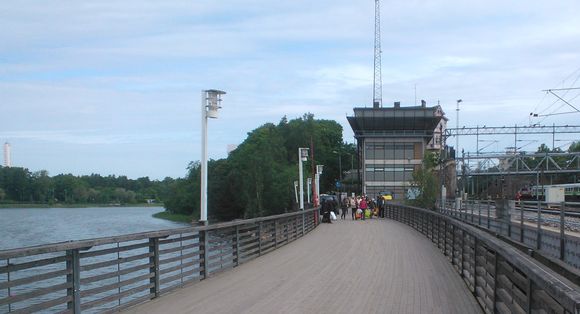 On Thursday Helsinki Police dismantled a camp under a bridge in the Linnunlaulu area, by the railroad and Töölönlahti Bay. Image: Yle

Nearly every day, Helsinki Police find and then dismantle illegal campsites set up by Roma and advise them if they want to camp, they should go to the Meri-Rastila camping area in eastern Helsinki.

There are usually only a few people at most of the campsites they come across police say, but occasionally they find as many as a dozen people in a camp.

On Thursday police dismantled a camp under a bridge in the Linnunlaulu area, by the railroad tracks and Töölönlahti Bay.

“We’ve found a fair amount of people hiding under the bridge in Linnunlaulu,” Helsinki Police Chief Inspector Seppo Kujala says. “The place is dangerous – they’ve been instructed to go somewhere else.”

“They are aware that camping is prohibited,” Kujala says.

Kujala says that the dismantling of camps is almost always calm.

The city is responsible for the cleanup of abandoned makeshift campsites.