Yet another reason why I totally distrust Marine Le Pen.

She’s cozy with the Iranian mullahs as well, so why should I be crowing about how great she is on Islam in general when she’s playing both sides of the Islamic aisle? Oh, and big deal, she didn’t wear a veil. Hoopty doo.

Le Pen, who did not wear a veil during the meeting, “recognised the need to not confuse Islam with the violent acts committed” in its name, Al-Azhar said. 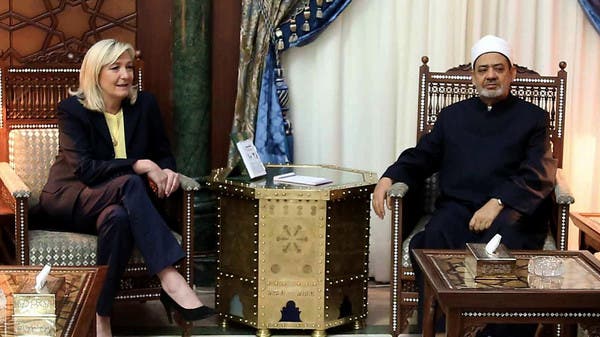 National Front president Le Pen met late Thursday with Ahmed al-Tayeb, grand imam of Al-Azhar, at its Cairo headquarters during which he questioned her organisation’s “hostile opinions towards Islam and Muslims”, an Al-Azhar statement said.

Tayeb added that the National Front’s “opinions must be reviewed and corrected”.

The National Front, which had a strong showing in local elections in March, has campaigned on politically explosive issues of immigration and the integration of Islam into French society after the Paris Islamist attacks.

Le Pen, who did not wear a veil during the meeting, “recognised the need to not confuse Islam with the violent acts committed” in its name, Al-Azhar said.

The National Front leader tweeted: “Meeting in Cairo with the highest Sunni authority: strong agreement on the fight against extremism.”

Thursday’s talks were conducted at Le Pen’s request, Al-Azhar said, “to discuss matters related to erroneous ideas and concepts about Islam and extremist ideologies and racism that some Muslims in Europe are suffering from.”