This is how they judge progress these day, a hundred or so less cars burnt, now that’s real progress in reigning in these Muslim groups!

The number of potential perps for future car-b-q’s continues to expand however, with each Muslim immigrant/migrant that enters the country. So what’s there to celebrate? 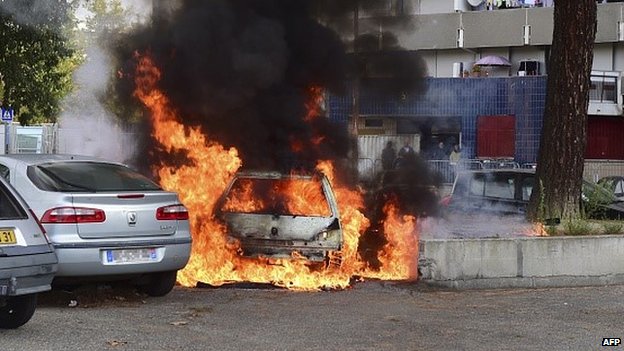 The number of cars set alight in France on New Year’s Eve fell significantly this year, the government has said.

Some 12% fewer cars were set alight on Wednesday compared with 2013, in a measure of what has effectively become an annual event in French suburbs since riots in 2005 in Paris and elsewhere.

The number of vehicles torched fell from 1,067 a year ago to 940, the interior ministry said in a statement.

Security was high in France overnight following a series of street attacks.

While the car-burning can be easily traced back to 2005, some correspondents say the idea of burning cars as a form of protest in France dates back into the 1990s.

The country has reported regularly on the numbers of cars set ablaze each December 31, although former President Nicholas Sarkozy abandoned the practice in 2010-11 amid fears it was sparking copycat actions.

The interior ministry this year cited the “substantial, active and dissuasive mobilisation of the security forces” as a reason for the fall this year.

Some 90,000 security personnel were deployed over New Year’s Eve.