Among Australian Jewry, none so Blind as those who Won’t See. 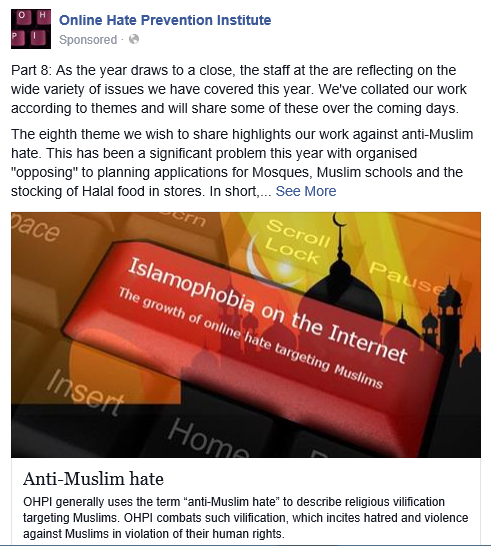 As breathtakingly naive as it is ostensibly nice.

For this goes far beyond condemnation of attacks on individuals who happen to be Muslim, and gratuitous baiting of members of the Muslim community, disgraceful behaviour which most decent people deplore.

I am hardly the only Australian Zionist concerned that Jews are giving aid and comfort to those who hate Israel, and that Jews are helping to muzzle free debate on an ideology that is widely regarded as misogynistic, antisemitic, and violent, and at odds with Western democracy, let alone that Jews are abetting the concept of “Islamophobia”. More here.

ISLAMOFAUXBIA, a ruse to confuse the non-Muslim.

I was more diplomatic with Oboler last year in a post where I noted that:

It’s my opinion that where Islam is concerned, Andre Oboler is grossly outside his area of expertise, being in great need of re-educating himself on the basics of Islam minus the mind numbing Islamic apologetics.

This time around however, I call into question, both his (Oboler’s) veracity and ethics, (edited*) for even trying to get stuff banned, for whatever the reason, well intenteioned or otherwise. Also, accusing those in the Counter-jihad / anti-Islamization movement of ”Islamofauxbia” for calling into question the incursion and intrusion of the halal industry that funnels not only fecal infected meat  into Australian (and western) food market, but also goes to fund the jihad being waged around the world, speaks either of gross ignorance or other outside pressures.

According to an online Youtube video, The Islamic Council of Victoria is advising the Andre Oboler and his OHPI on what is ”Islamofauxbia”. Being ignorant of Islam 101, he fails to realize that the simple fact of being a non-Muslim, is in fact all by itself, an offense to Islamic sensibilities, and reason enough to bring all kinds of mischief upon the non-believer and their communities.

Using the same logic as the OHPI, one would be forced to conclude that anyone caught smearing the German National Socialists during the 30’s and later on, for their world wide intentions, for their intended usurping of national sovereignty and imposing their anti-liberal laws of jurisprudence, would be, and should be, met with someone with the likes of Andre Oboler.

No doubt Oboler  himself believes the meme that Islamization is not a real phenomenon, but he’ll have to ask himself a larger question, how is it that the Jews of Australia (and elsewhere around the globe) who have their own religious laws, and have lived there for a longer period than Muslims, have never tried to impose their beliefs upon the greater non-Jewish society, but the same can’t be said of the Muslims?

Answer: The former is a private belief system, where live and let live is the rule of the day, while the latter is of the public square variety and very messianic in nature. Therein lies the big difference that eludes the great Oboler.

* Edited out the post the portion questioning as to whether or not OHPI is/was being financed by Muslim groups. The question could be construed as being a trick lawyer question: when did you stop beating your wife”. My apologies on that score.