Not only that, what mosque in the U.S. did the jihadi attend?

“We’re hoping that someone might recognize this individual and provide us with key pieces of information,” said Michael Steinbach, assistant director of the FBI’s Counterterrorism Division. “No piece of information is too small.”

The FBI Wants You! To Help it Identify Terrorists

The FBI wants Americans to see whether they recognize an ISIS terrorist with a North American accent, so they have released a video of the man.
By: Lori Lowenthal Marcus
Published: October 7th, 2014 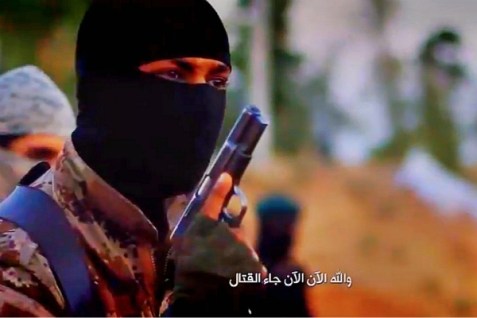 Terrorist in a video the FBI has released, hoping viewers can help identify him. Oct. 7, 2014.

The Federal Bureau of Investigation is asking for the public to help identifying a particular terrorist as well as other possible wannabe-terrorists.

On Tuesday, Oct. 7, the FBI released a video in which an ISIS terrorist is shown speaking Arabic, but then switches into perfect English, spoken with a North American  accent. The terrorist points to Syrians, men he calls “soldiers of Assad.” The faces of the men are blurred out, but the masked terrorist informs the audience that the men are digging their own graves.

The video, which appears after this article, is part of a new effort by the FBI to elicit the public’s help through the use of social media. The FBI has also posted online a form for viewers to fill out if they believe they have information about the identity of the ISIS terrorist in the video.

The video ends showing the men who had been digging with shovels lined up, kneeling at the edge of the pit that was dug. The terrorist is holding a pistol.