So much for the Norwegian government(s) placating Islam for the past couple of decades. 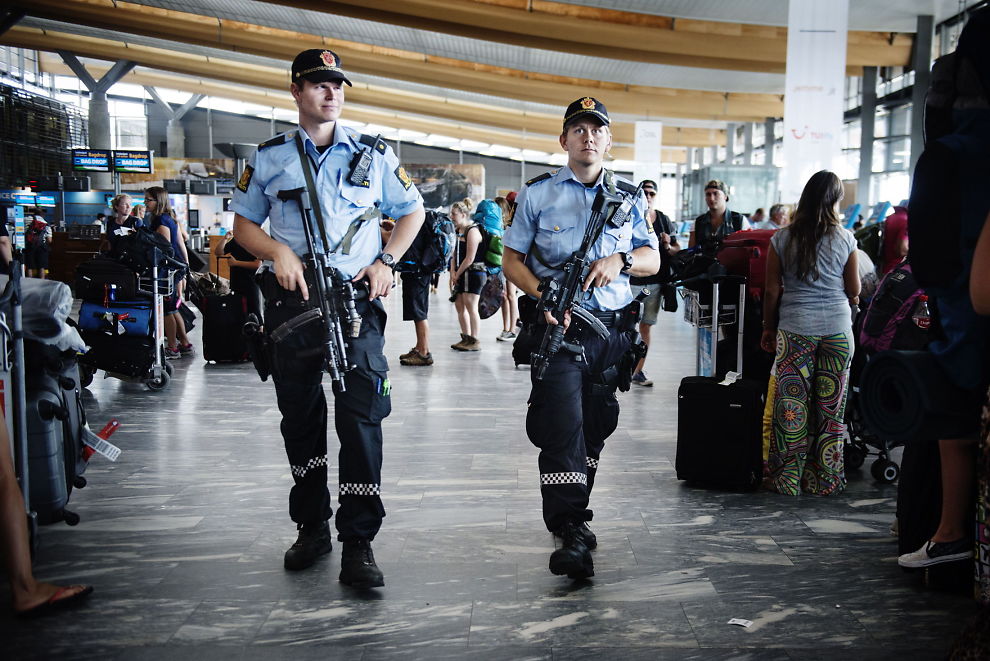 ARMED: From early morning on July 24 patrolled heavily armed police on a number of public places in Norway. There was a specific threat that terrorists would attack innocent Norwegians. Here goes armed officers in the departure hall at Oslo Airport.

The extremists were to enter the house of a random family and film while killing the residents, was one of terror scenarios Norwegian authorities feared in the summer.

Previously, VG wrote that the Norwegian Police Security Service (PST) received information that terrorists were planning to attack with knife in large crowds .

Now it turns out that this was one of several possible scenarios, and that to call home with a random family thus also was a key opportunity.

It was Thursday July 24, the Government announced that Norway faced a terrorist threat. PST and the government was then, however, very little specific on what the threat was about.

Isis terrorists were going to kill an ordinary Norwegian family

According to the authorities isis Islamist terrorists were going to attack randomly selected house and kill its inhabitants. The alternative was to attack the people attacked with knives in a public place.

The Norwegian authorities have received new information about the July terrorist threat in Norway.

According to the authorities isis Islamist terrorists were going to attack a randomly selected house and kill its inhabitants.

NRK’s ​​data show that the terrorists were going to describe the killings and distribute video on the internet.

The aim was to choose an ordinary Norwegian house and family, which the Norwegians would have been able to relate to and identify themselves. The alternative was to attack people with knives in a public place.

The Norwegian authorities tightened border checks in July in Northern Finland and Northern Norway’s borders was due to the terrorist threat.

Dagbladet said in the fall of the four isis-terrorists that they were on their way to Norway in July. The aim was to make a terrorist attack, which were to kill people.