These are some real evil people.

The danger has been talked about for a long time now, and thankfully, their efforts have been thwarted for a umber of different reasons, but it’s only a matter of time till one or more are successful. All the more reason to drive these bastards on the run for their lives, 24/7, they can’t plan attacks if they’re dead or on the run.

US: Al-Qaeda’s Syrian cell poses more imminent threat than IS 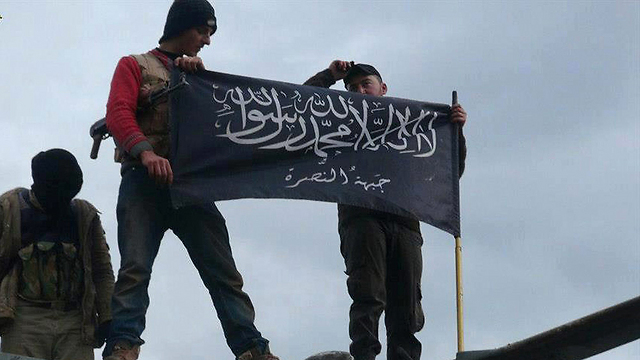 American officials fear Khorasan group, who is recruiting Europeans, Americans in Syria, will use these recruits to sneak explosives onto US-bound flights.

WASHINGTON – While the Islamic State group is getting the most attention now, another band of extremists in Syria – a mix of hardened jihadis from Afghanistan, Yemen, Syria and Europe – poses a more direct and imminent threat to the United States, working with Yemeni bomb-makers to target US aviation, American officials said.

At the center is a cell known as the Khorasan group, a cadre of veteran al-Qaeda fighters from Afghanistan and Pakistan who traveled to Syria to link up with the al-Qaeda affiliate there, the Nusra Front.

But the Khorasan militants did not go to Syria principally to fight the government of President Bashar Assad, US officials said. Instead, they were sent by al-Qaeda leader Ayman al-Zawahiri to recruit Europeans and Americans whose passports allow them to board a US-bound airliner with less scrutiny from security officials.

The Obama administration has said that the Islamic State group, the target of more than 150 US airstrikes in recent weeks, does not pose an imminent threat to the continental US. The Khorasan group, which has not been subject to American military action, is considered the more immediate threat.

Because of intelligence about the collaboration among the Khorasan group, al-Qaeda’s Yemeni bomb-makers and Western extremists, US officials said, the Transportation Security Administration in July decided to ban uncharged mobile phones and laptops from flights to the US that originated in Europe and the Middle East.