Which tells me that his being ”stunned” is all an act. 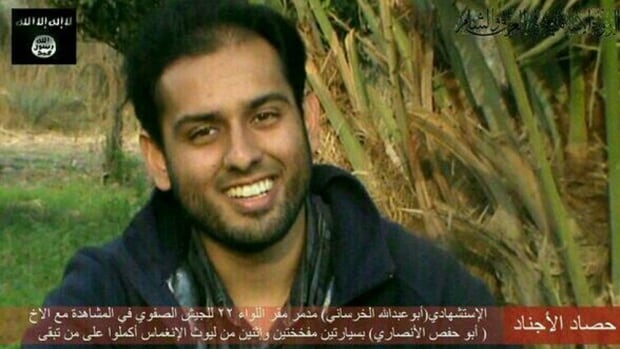 Calgarian Salman Ashrafi, shown in a recently released ‘martyr’s notice,’ was identified by the al-Qaeda splinter group ISIS as being a suicide bomber behind a November 2013 attack in Iraq. (Twitter)

Homegrown extremism abroad has a new face, and CBC News has learned it belongs to yet another Calgary man, a development that points to the West as a hotbed for exporting jihadis.

His name is Salman Ashrafi, and when the Al-Qaeda splinter group ISIS (Islamic State of Iraq and Syria) released images of him last month following a double suicide bombing in Iraq in November that killed 46 people, he was celebrated in a martryrdom notice.

Only then, he was known as Abu Abdullah Al Khorasani.

CBC News has confirmed that Al Khorasani was Ashrafi’s nom de guerre and that he was a Canadian citizen who grew up in the Stampede City, where he went to school and worked.

The Calgarian’s story is one of as many as two dozen others, most of whom left to battle alongside rebel militants in Syria.

At one time, Ashrafi led a lifestyle many would have envied, with jobs at Talisman and Exxon and huge downtown Calgary firms.

Much has changed since then. The revelation that he killed himself and others as part of an attack for ISIS — a group known for such grotesque violence it has even drawn condemnation from Al-Qaeda — has stunned people who spoke with CBC News and knew him.

Among them was Syed Soharwardy, the prominent Calgary imam.