Muslims are idolaters, they worship Mohamed.

It’s what to expect in the West once they achieve near parity in demographic numbers. Not to worry though, religious leaders will encourage yet more of that all important …”inter-faith dialogue”. 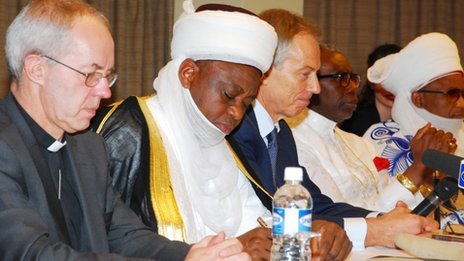 Christian and Muslim leaders are encouraging inter-faith dialogue in Nigeria

A rumour that a Christian man blasphemed against Islam has sparked a riot in the northern Nigeria town of Bichi, police have said.

Residents said four people were killed and shops were looted.

The riot came on the day the incoming head of the Anglican Church, the Rt Rev Justin Welby, launched an initiative to promote religious tolerance in Nigeria.

Religious clashes have claimed thousands of lives in Nigeria since military rule ended in 1999.

The militant Islamist group, Boko Haram, has also been waging an insurgency since 2009 to impose strict Sharia across Nigeria, which is roughly divided between a mainly Muslim north and a Christian and animist south.

“Rumours went round that someone blasphemed the Prophet [Muhammad] and there was a breakdown of law and order,” he is quoted as saying.

The BBC’s Yusuf Ibrahim Yakasai in Kano, the main city in northern Nigeria, says that a heavy contingent of soldiers and policemen have been deployed to Bichi to restore order.