The founder of Islam guaranteed the right to rape the conquered’ females as a trophy of their victory, so Gadaffi’s men are continuing in that same mohammedan tradition. KGS

Libya: ‘Forced to rape in Misrata’ 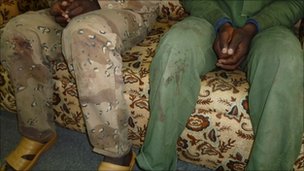 The rebels did not want the men to be identified

Was there a systematic campaign of rape by forces loyal to Libyan leader Colonel Muammar Gaddafi during the battle for Misrata?

Two young prisoners in a detention centre in the city tell me the answer is almost certainly “yes”, and that they took part in the gang-rape of four women.

The men, aged 17 and 21, are sitting on a sofa – heads bowed – in the same filthy, bloodstained army fatigues they were captured in two weeks ago.

They are obviously nervous, but speak clearly.

The authorities in this rebel-held city were reluctant to let us interview them, but finally agreed on condition we do not reveal the soldiers’ names.

Before I go any further, let me acknowledge that it is clearly in the rebels’ interest to portray Col Gaddafi’s forces in the worst possible light.

It is also possible that the soldiers were coerced into telling us lies.

And there is a big difference between individual acts of violence committed during wartime and a systematic campaign to target civilians.

The girls said nothing. They were tired and they were in bad shape because there were 20 officers before us”

My impression was that the men were telling the truth and that – although there are credible stories of abuse of pro-Gaddafi troops by rebel forces – the conditions and atmosphere at the prison, which I have visited before, appeared benign.