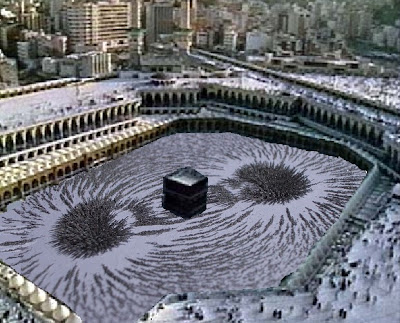 Oh yeah, then what keeps these pin heads
spinning around the smooch stone?
The only thing they get wrong is comparing traditional Christian thought towards science with that of knumbskull Muslim thinking towards the world around themselves. No comaprison. KGS

Science blogs: From the department of not getting it
Category: Kooks • Religion

Muslims in Saudi Arabia are building a giant clock that resembles Big Ben, but is over six times larger. They want to replace Greenwich Mean Time with Mecca Time as the world standard.
As Mohammed al-Arkubi, manager of one of the hotels in the complex, put it: “Putting Mecca time in the face of Greenwich Mean Time. This is the goal.”
This is a beautiful example of cargo cult science. Big Ben has nothing to do with establishing GMT — it’s just a big clock in London. GMT is entirely about establishing a uniform standard reference time. It was set rather arbitrarily to the time at an observatory in England, because England was the leading maritime nation at the time and used solar observations relative to Greenwich to determine the longitude of ships at sea. Greenwich time has also been replaced since then by Coordinated Universal Time, which is based on measurements of a world-wide network of atomic clocks, which turn out to be more reliable than figuring out the position of the sun.
It’s an arbitrary standard, get it? Building a giant clock in the desert will not suddenly attract time to line up with it. Although it does sound like a perfectly kitschy and annoying clock, with bright lights that can be seen 18 miles away that will flash and blink in colors to let people know it is time to pray. I suspect they’re also trying to standardize the web back to 1995 html, too.
And of course there is more. There is a whole lot of freakish cargo cult science going on down there.

According to Yusuf al-Qaradawi, an Egyptian cleric known around the Muslim world for his popular television show “Sharia and Life”, Mecca has a greater claim to being the prime meridian because it is “in perfect alignment with the magnetic north.”
This claim that the holy city is a “zero magnetism zone” has won support from some Arab scientists like Abdel-Baset al-Sayyed of the Egyptian National Research Centre who says that there is no magnetic force in Mecca.
“That’s why if someone travels to Mecca or lives there, he lives longer, is healthier and is less affected by the earth’s gravity,” he said. “You get charged with energy.”