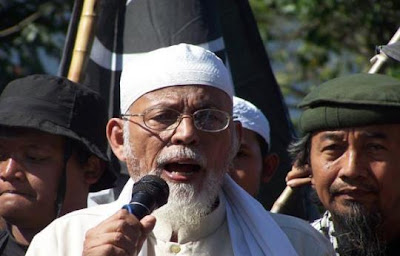 Abu Baasyir: Point me to the revolving door
Why oh why didn’t the tsunami wipe this Islamo-whack job and his supporters off the map, instead of the hard working people of Aceh who had built their region into the tourist dynamo that it was before the tsunami hit? KGS
Jakarta, 9 August (AKI) – Indonesian police on Monday in West Java arrested firebrand Muslim cleric Abu Bakar Baasyir on suspicion of setting up an Islamist militant training camp in Aceh. Police claim the camp, uncovered in February, was Al-Qaeda’s regional base.
National police spokesman Edward Aritonang said Baasyir was arrested along with his five bodyguards. He has not yet been formally charged.
“Five bodyguards were also captured because they tried to stop police officers from arresting Baasyir,” Indonesia’s Jakarta Post daily quoted Aritonang as telling a media conference.
He said Baasyir played an active role in preparing the extremist training camp in Indonesia’s Muslim-devout province of Aceh.
“Baasyir was very active in preparing the camp which was used as Al-Qaeda in Southeast Asia,” he stated.
Indonesian national anti-terrorism police arrested Baasyir in Ciamis, West Java on his way home to Solo, Central Java.
More here.