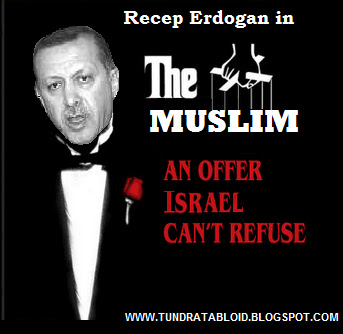 Erdogan: We Turks are making an Islamic comeback,
addressing the Jewish problem is pivotal to our success
The IHH organized and funded “Flotilla of the Huns” was a Turkish attempt to reassert itself as the key player in the Muslim Middle east, and perhaps even in the whole Islamic world.
The befuddled media and politicians in the West fell over themselves in their rush to condemn the Jewish state for protecting itself against the possibility of weapons being smuggled into the Gaza Strip. What is now known by the IDF, is that active terrorist operatives were found on board the Mavi Marmara, as well as IHH leader, Bülent Yildirim, who is unconcerned about protecing human life, the man is an open Hamas supporter and no humanitarian.
So the Fattah are worried about Turkish support for Hamas, they should be, but lets not fool ourselves here, there isn’t any difference between Hamas’ end game for Israel and Fattah’s, on that score they’re in full agreement.
This fight between Hamas and Fattah is an in-fight between competing gangs, in much the same way as the Bloods and the Crips fight over turf in California. So it’s all the same which side in the fight the Turks line up with, the key trouble here is, that the Turks are in fact taking sides. KGS

NOTE: Oh and the Iranians are happy to compete for Islamic dominence (read= hearts and minds) as well, nothing like jumping up and down on a Jew to get the Muslim street rooting for you. “Gaza blockade: Iran offers escort to next aid convoy“

The Palestinian Authority is concerned about Turkey’s increased support for Hamas, a PA official in Ramallah said on Monday.
The official said that the PA leadership was “unhappy” with Turkey’s policy toward Hamas, especially with regard to pressure to lift the blockade on the Gaza Strip unconditionally.
“Turkey’s policy is emboldening Hamas and undermining the Palestinian Authority,” the official told The Jerusalem Post.
“Of course we want to see the blockade lifted, but Hamas must also end its coup in the Gaza Strip and accept an Egyptian proposal for achieving reconciliation with Fatah.”