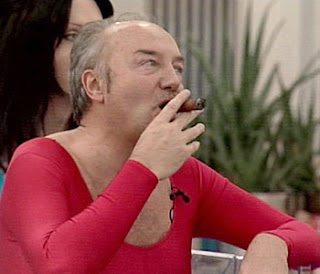 Galloway: I hope my red tights won’t
cause a scandal with my muzzie friends
Oh, there’s no doubt whatsoever that Galloway will use this to prove how much a moderate he is and how “he too” is against extremism. Just like gangsters turning on each other for one reaon or another, Galloway gets “bitch slapped” by one of his Muslim homies, and we’re all supposed to feel some kind of compassion for him? Hell no. KGS

George Galloway was set upon by a group of Muslim extremists while campaigning in East London this afternoon. Three men, believed to belong to the extreme sect Islam4UK, the latest name for Al-Muhajiroun, were arrested and subsequently charged with public order offences.
Galloway, who is standing in the Poplar and Limehouse constituency, was with a party of supporters in Watney Market around 3pm when he and his colleagues were first abused and then attacked by the group.
“They called me a filthy Kaffir” said Galloway, “and shouted that no one should shake the ‘filthy Kaffir’s hand’. This lot are the latest incarnation of the banned group Al-Muhajiroun. They don’t want Muslims to vote, they don’t believe in democracy, and because I encourage Muslims to vote and take a full part in our society they hate me. My party, Respect, is the antidote to these despicable extremists.”
Galloway’s assistant Kevin Ovenden had his phone smashed in the incident and other supporters were abused and jostled.
Galloway was also attacked, held hostage and received death threats from Al-Muhajiroun, then called Al-Gourabaa, in the 2005 General Election.