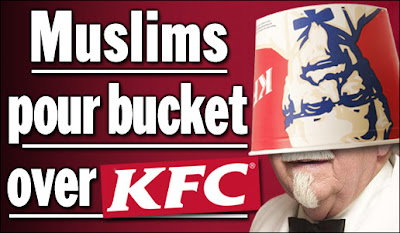 The Colonel: I didn’t see that one coming!
Once you let the foot into the door, you open up a whole can of worms, with the Islamic community bitching and complaining for more “respect and observance” of their ridiculous inhumane rules. KFC should just drop the whole scheme, they stand to loose far more in Christian business than in any Muslim business, besides, the unsavory aspect of aiding and abetting the Islamization of the UK is more than enough reason to just say no to halal. KGS

FINGS are not lickin’ good for KFC in their bid to sell fried chicken to Islamic customers. They’re now being threatened with a boycott by both Muslims AND non-Muslims.
Britain’s second biggest fast food chain hoped to woo the Islamic market by opening 86 trial outlets selling halal-only meat – that’s from animals slaughtered under strict religious guidelines.
But KFC’s target diners insist the chickens are not being killed in the right way and say they will stay away.
And furious non-Muslim customers have set up Facebook groups protesting that the trial branches, which also ban pork, have dropped their favourite bacon-topped Big Daddy burger from menus.
Groups with names such as “Against the KFC Halal Trial” and “No Halal at Colne KFC” – referring to a branch in the Lancs town – are rapidly attracting members. For meat to be halal, the animal must be alive when its throat is cut as a verse from the Koran is recited.
KFC insists their methods meet the approval of the Halal Food Society. But Islamic leaders disagree, saying the pre-stunning of animals in the chain’s mechanical process means a third are already dead at the point of slaughter.
And the fact the prayer is played over a speaker means each bird it not blessed individually as it is killed.
They have now threatened to warn the UK’s 2.4million Muslims not to eat KFC meat, and will meet with the fast food giant on Wednesday to question how it is killing chickens sold as halal.
Imam Yusuf Shabbir of the Lancashire Council of Mosques said: “If KFC confirms to us that it has no intention of changing the mechanical method of slaughter we will advise members of the Muslim community this.”
But a KFC spokesman said: “We’ve worked with animal welfare organisations and the Halal Food Authority to ensure our processes fully comply.
“And wherever possible we’ve made sure our trial stores are near non- halal restaurants, to provide customers with a choice.”