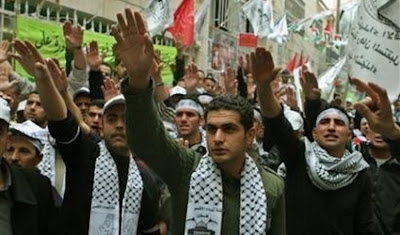 When sub-human pieces of crap
(supremacists, terrorists & sharia supporters)
control the debate
That’s basically what’s in question here, barbaric totalitarians dictating to the West, and the fools allowing them to do so, whether through ignorance or design. If more Western politicians looked to Barry Rubin for advice and expertice in understanding the Arabs, they would be that much closer to pulling the plug on their nonsense. KGS

Why Does the Palestinian Authority Celebrate Those Who Turned Christianity’s Holiest Shrine into a Military Bunker?

Barry Rubin: The Obama Administration doesn’t understand this but it is signaling the Palestinian Authority (PA) that it can get away with anything, thus further dooming any hope for serious negotiations and perhaps leading to a restart of large-scale violence.

Decades ago, when Middle East experts held views closer to the region’s realities rather than to its propaganda, it was well-known that one of the best ways to mobilize a big demonstration or riot in Arabic-speaking countries was to tell people: The government is with you.

Say, for example, you wanted to smash up of the British embassy in Damascus or Cairo. The trick would be to persuade the masses that their rulers wanted them to do it and thus they would be rewarded, not punished. In effect, this is the consequence of what the Obama Administration is doing inadvertently.
The PA has concluded that the U.S. government will never criticize or punish it. Indeed, Palestinian leaders know that the more intransigent they are, the more conflict they can provoke in U.S.-Israel relations.
Here’s the chain of reasoning:
–The Obama Administration wants progress toward peace for which it can take credit and which supposedly will help it in Afghanistan, Iraq, and in dealing with Iran.
–If Israel doesn’t make concessions, U.S.-Israel friction will result. But if the PA is intransigent, there will be no problem in bilateral relations.
–Instead, the U.S. government will say: Since the PA won’t yield or accept our offers, we must put pressure on Israel to give more in order to get the PA on board.
–Indeed, in this framework, the more radical things that the PA does which encourage Israeli anger and reluctance to take risks, the more Israel gets blamed for the result.
–Conclusion: Being intransigent, creating conflict, and even inspiring violence is in the PA’s interest.
Here’s an example. While the Obama Administration is angry at Israel merely because a low-level committee announced one of seven stages toward building apartments perhaps in a couple of years, the PA’s very top leadership is honoring terrorists responsible for the murder of many Israeli civilians and American citizens.