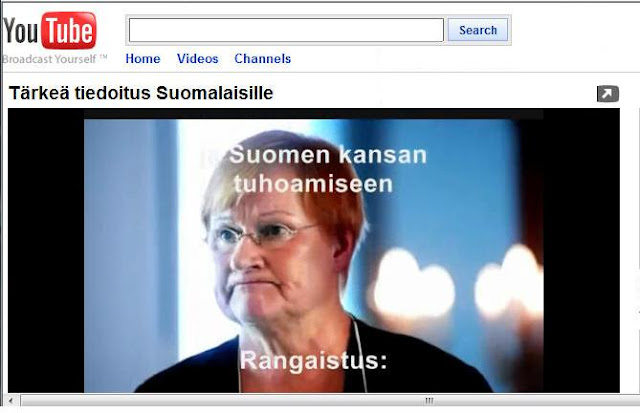 The text reads: Important announcement for Finns. For the destruction of the Finnish people. The penalty: [then tells of the means of execution]
The Leftist loon racist responsible for the website and You Tube video, is a Finnish National Socialist, and is against foreigners in general, and most likely against Jews and Blacks in particular. This has nothing to do with the Islamization, and everything to do with racial purity, and that is something that needs to be highlighted as well as condemned in the strongest of terms.
Here’s a portion of text from this nutcase’s website that the Tundra Tabloids uncovered (but won’t link to), which highlights the Left’s fraudulent thinking about Israel in general. The TT republishes this only to draw attention to his anti-Israeli rhetoric, which promotes the false claim of ethnic cleansing. Most noticeably, this idiot racist leaves out the fact that Israel has around 1.2 million Arabs as citizens.
“Violence is a 100% certainty workable solution. It has been used repeatedly in human history. One example is how the Jews cleaned the current Israeli territory almost entirely of the Palestinian-Arab population, with ruthless violence and terror. Let us try and let us take the same approach.”
Multicultural policies have been responsible for the Islamization of Europe, that’s a fact, and that it has been indeed a policy with the aim of radically changing European society as a whole, is a fact as well. Those who belong to the cult of multiculturalism, whose dogma consists of mass immigration without any checks or balances,  mirrors the thinking, but in exact reverse, of those who are against all immigration in general, and insist on racial purity.
Both ideologies rest solely on the Left, but you can be assured that the Leftist media media will spin this as being a “Right-wing” racist movement, and that all of us who criticize Leftist multi-culti polices are to understood as being, in one way or another, connected with it. It’s nonsense, but that’s the meme being promoted no matter how irrational. KGS

The National Bureau of Investigation is examining an online hate site that calls for the murder of leading Finnish politicians as well as immigrants. The Finnish-language site is registered to a long-time American neo-Nazi.
The anonymous author behind the site’s writing is suspected of illegal threats and the incitement of hatred against an ethnic group.
The site calls for the hanging or shooting of much of the Finnish political leadership, including President Tarja Halonen and Prime Minister Matti Vanhanen. The site also featured a hit list of 50 Finns, named for their role in promoting multiculturalism.
The site is registered to an American named Gary Lauck, a neo-Nazi who became known in 1980s and 90s for smuggling neo-Nazi literature into Europe. Lauck, who served time in a German prison in the late 1990s, later moved his propaganda online.
Göran Wennqvist from the National Bureau of Investigation says it’s been difficult to trace the site’s administrator. Finnish police officials have cooperated with US authorities in the case.
“The concept of freedom of speech is broader in the United States than in Finland. But to my knowledge, these types of direct threats are against the law there too,” says Finnish state prosecutor Mika Illman.
Finnish police are increasingly investigating websites that support intolerance. Last week threats of violence were made against Minister of Migration and European Affairs Astrid Thors on Facebook.

NOTE: Here’s a video the Tundra Tabloids captured, and subtitled a while ago, that shows just how the media loathes to view Leftist racists as being part of the Left. Here is extremist nationalist Olavi Mäenpää from teh Finnish Blue and White party, that places himself and his party on the Left, but the Finnish media expresses doubts nonetheless. Amazing.

NOTE: There is also another possibility that can’t be ruled out. That ANTIFA thugs are responsible for the racist websites and the You Tube video, in order to discredit the anti-Islamization movement. Just keep in mind the Canadian Human Rights Commission, who’s members were found to have visisted various websites and blogs and posted racist comments in order to discredit the owners of those websites.

Also, in Sweden, ANTIFA and the far Leftist racism monitoring group EXPO, have worked hand in hand, in attacking what they deem to be the opposition, using all sorts of tactics, including violence.