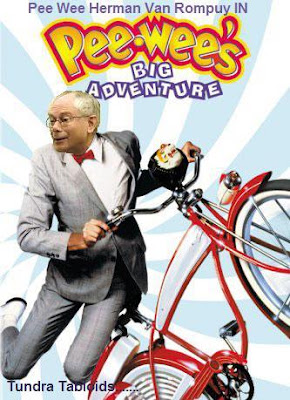 Charisma of a damp rag” and
the appearance of a “low-grade bank clerk.”

The new head of the statist EU, Herman Van Rompuy gets his comeuppance in parliament, by the UKIP’s one and only, Nigel Farage. Pure poetry. KGS

EUOBSERVER / BRUSSELS – Herman Van Rompuy was subjected to a series of personal insults on Wednesday (24 February) spoiling his maiden appearance in the European Parliament as president of the European Council.
Mid-way through a fairly tame exchange of views on EU policy, Mr Van Rompuy was visibly shocked and uncomfortable when comments by British eurosceptic MEP Nigel Farage took a personal turn.
Speaking about Mr Van Rompuy’s 15 minute introductory speech, Mr Farage said he had the “charisma of a damp rag” and the appearance of a “low-grade bank clerk.”
“I have never heard of you. Nobody in Europe had ever heard of you,” the British politician continued, referring to the former Belgian prime minister’s surprise appointment late last year to chair the regular meetings of EU leaders.
Virtually unknown outside Belgium, Mr Van Rompuy’s low-key manner coupled with not having any pretensions to limelight-stealing were widely seen as key to him securing the job – a new post created by the Lisbon Treaty, in place since 1 December.
Since then he has maintained the background approach but has started to make his presence felt by calling an informal economic summit earlier this month, suggesting EU leaders meet every month and making it clear that he intends to be a visible presence at the G20 meeting later this year.
Mr Farage’s outburst, which was rounded off with a back-handed compliment that Mr Van Rompuy was also “competent and capable and dangerous,” was immediately criticised by his colleagues.
Joseph Daul, head of the centre-right EPP party, suggested the UK should leave the EU as it is apparently not pleased to be in the union.
More here.
H/T Baron Bodissey