Skip to content
Home
/
2010
/
January
/
30
/
Atlas Shrugs
/
MORE ON THE UNCLE OF YASSER ARAFAT, THE MUFTI OF J’LEM, HAJJ AMIN AL-HUSEINI AND HIS ROLE IN THE FINAL SOLUTION OF JEWS IN EUROPE…….
Facebook
Twitter
Google+
LinkedIn
Pinterest 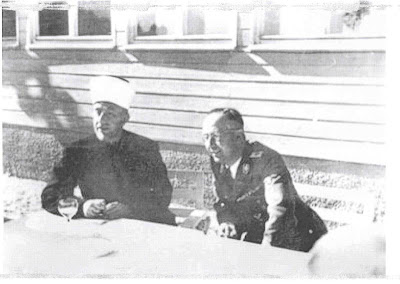 Mufti of J’lem Hajj Amin al-Huseeini discussing with Himmler
on how best to take care of the ‘pesky Jewish problem’
Pamela Geller over at Atlas Shrugs continues with her exposé on the Arabs’ role in the “Final Solution” of European Jewry during WWII (and eventually in the Levant if Germany had won the war), as well as her search for the name of the occupant of the apartment who stashed the recently found blueprints of Auschwitz into one of its walls.
Atlas Shrugs recaps:

In August of 2008, a terrible discovery was made in Berlin: the original blueprints of the Auschwitz death camp, found by chance in a Berlin apartment. Wladyslaw Bartoszewski, an Auschwitz survivor, said they give a glimpse of “true hell.”

Stamped with the Nazi abbreviation for concentration camp “K.L. Auschwitz,” one of the largest featured multi-colored sketches, with barracks and even latrines drawn in detail. Other smaller sheets showed architectural designs of individual buildings, drawn from various angles. (here)

“Original plans for the construction of the Nazi extermination camp of Auschwitz, including a gas chamber and crematorium, have been found in a Berlin apartment, a newspaper reported yesterday.”

It said they were dated between 1941 and 1943 and stamped, “Waffen-SS and Police Construction Directorate”. Some were signed by senior SS officials and one initialled by the head of the Nazi ideological corps, Heinrich Himmler.(more here) 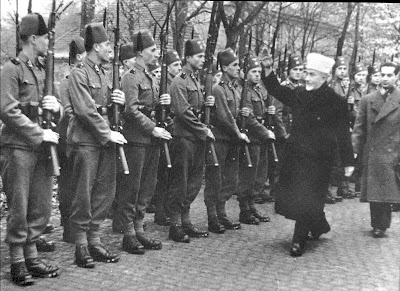 This is a story with far reaching ramifications. The Tundra Tabloids has forwarded its own inquiries with a certain international organization (which follows such issues) that just so happens to haves a branch in Germany, to see if they have uncovered anything about the matter. Pamela continues:

“The daily Bild published copies of some of the 28 plans, which the head of Germany’s federal archives, Hans-Dieter Kreikamp, called “authentic proof of the systematically planned genocide of the Jews of Europe”. Bild gave no indication of where, when or by whom the plans were found.

The location of their discovery is being kept secret. The only information that was released was that they were ‘discovered in a apartment behind a wall when a renovation/remodel was taking place’. An Auschwitz anonymous source tells me that with all of the ‘slight’ tid-bits of information, it points to a possible location where the Grand Mufti lived during WWII. If it were the residence of the Grand Mufti, this would point to the muslim participation in and possible creation of the Final Solution, as was testified in the Nuremberg Trials (witnesses testified that the Grand Mufti was the originator/creator of the idea).”

NOTE: There’s more. The Mufti was one of, or the arcitect of the “Final Solution” of the Jews The more I research the origins of the Auschwitz blueprints found behind a wall in Berlin, signed with the handwritten initials H.H. – belonging to the infamous Nazi SS chief Heinrich Himmler, the more devastating is the proof unearthed of the absolute leading role the Mufti had in the extermination of the Jews. And how close were the Mufti and Himmler.

Note the dates of the Mufti’s visit with Himmler, his tour of the death camps, and the date of the Himmler signed original blueprints of Auschwitz. Why, in heavens name, is everyone covering up the major role Islam had in the holocaust?

According to testimony by Nazi war criminals, the Mufti’s influence was critical to the German decision to annihilate the Jews of Europe. At the Nuremberg Trials in July 1946, Eichmann’s deputy Dieter Wisliceny (subsequently executed as a war criminal) testified::(here)

“The Mufti was one of the initiators of the systematic extermination of European Jewry and had been a collaborator and adviser of Eichmann and Himmler in the execution of this plan… He was one of Eichmann’s best friends and had constantly incited him to accelerate the extermination measures. I heard him say, accompanied by Eichmann, he had visited incognito the gas chambers of Auschwitz.”

KUDOS to Atlas for the ground breaking work.