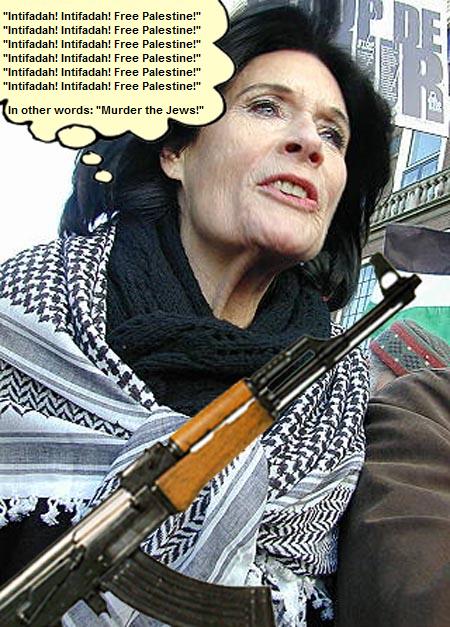 Gretta: I’m a Leftist, I can, get away with calls for murder
Hey, the Left has been getting away with murder for generations. They are still able to wave the hammer and sickle in public while its bastard relative, the National Socialists, are (correctly) scorned in public for doing the same, with their loathesome standard being spat upon and rendered to the absolute fringe of society.
As long as the Left continues to holds power (not just in government but in other branches of power), the morons that constitutes its rank and file will be able to get away with just about anything that they want to. That the truth teller, Geert Wilders, is both vilified and prosecuted by the state for merely pointing out the obvious, is telling enough. KGS

The vile incitement to kill Jews runs rampant in Europe (much of it under the instruction of the koran with the malevolent agitation of the left.) But that’s OK because Europe and particularly Holland, in this case, has a peculiar and insatiable appetite for Jewish blood . But this latest act of hypocrisy and bigotry is stunning. On the one hand, you have Jew haters calling for the gassing of the Jews and thats not illegal. But Wilders is on trial as we speak and may likely go to jail for pointing to the violent texts in the Koran. Truth is illegal. Calls for genocide “did not constitute a criminal offence” but Fitna does. Is it any surprise that gruesome Greta is one of the three?

The Dutch authorities have decided not to prosecute the Socialist Party MPs Harry van Bommel and Sadet Karabulut and activist Gretta Duisenberg for inciting hatred, discrimination and violence.

In January last year they took part in a demonstration in Amsterdam protesting against an incursion into the Gaza Strip by the Israeli army.

A video of the demonstration which appeared on internet showed the three shouting “Intifadah! Intifadah! Free Palestine!”

Renowned criminal lawyer Bram Moszkowitz submitted a complaint about them and other demonstrators who were shouting “Hamas! Hamas! Give the Jews the gas!”

The Public Prosecutor’s Office has ruled that the “Intifadah” slogan did not constitute a criminal offence, on the grounds that an intifadah or “uprising” can be violent or non-violent. The “Hamas” slogan was judged as inciting hatred but it was not possible to establish who in the crowd was guilty.

It also ruled that the three could not be held responsible for slogans shouted by other demonstrators.