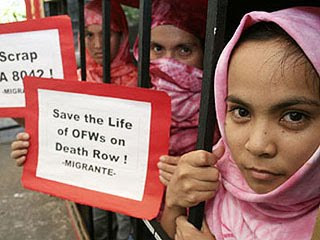 Help us
But there is no forced conversions in Islam!? At least that’s the meme being spread about by the Ideology of Perpetual Outrage, and its apologists. Actually there is forced conversions in Islam, it’s called “dhimmitude”, the second class status of non-Muslims living in Islamic countries that have been fully Islamized.
The more Islamic a state becomes, the less likely the non-Muslim will be spared gross humiliation. Filipino women living in Saudi Arabia, depending on the employer, but the practice is wide spread, have become virtual slaves in the households they are employed. That they are being forced to convert is only the logical outcome of a preceived “infidel” living in the “land of the misogynist prophet”. KGS

A Filipino nurse with ten years in Saudi Arabia talks about the dramatic situation of Christian workers, forced to embrace Islam just to keep their job. Despite abuses and violence, migrants still choose the Middle East because of the availability of work.
Manila (AsiaNews) – “In my tens in Saudi Arabia, I have witnessed several Catholic or Christian Filipino migrants accept Islam under duress,” said Joselyn Cabrera, a Filipino Catholic nurse working at Riyadh hospital. Because of high unemployment levels in the Philippines, more than ten million Filipinos have left to seek jobs abroad. Every day, about 3,000 leave the country. Recently, a majority has gone to Arab countries—some 600,000 in all, 200,000 in Saudi Arabia alone.
“After some months, employers give you an ultimatum, telling you to become Muslim to keep your job,” she said. “For us, it is hard to make such a choice, but if we don’t, we become the victims of abuse.”
In her years in the kingdom, she said she saw at least 50 forced conversions at work.
“Even I have been subjected to pressures from my Muslim co-workers, but I have always refused saying that I’d rather remain Catholic. Until now, nothing has happened to me, yet.”
According to the Philippine Overseas Employment Administration (POEA), Filipino emigration towards the Middle East has grown by 29.5 per cent between 2007 and 2008, a destination of choice for many migrants, and this despite horrible working conditions that include the possibility of forced conversion and sexual abuse in the case of women.
The most recent case involves a woman who was raped at work. Because of the incident, Saudi authorities accused her of unlawful extramarital sex and on 11 September jailed her in the capital.
As a result of the rape, she became pregnant, but miscarried because of harsh conditions in the prison.
Next month, she is scheduled to appear before a court, which could sentenced her to 100 lashes (see “Riyadh: rape victim might be lashed 100 times,” in AsiaNews, 22 January 2010).