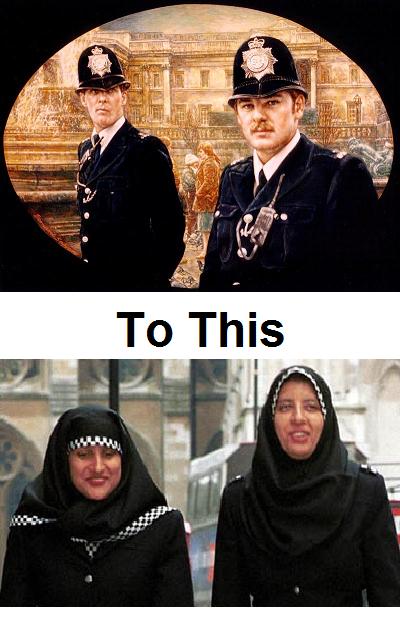 The new UK police force:
Truth telling  stigmatizes us
That’s game being played, mention just once that Islam is the primary motive for jihadi terrorism, and you’ll have the members of the Ideology of Perpetual Outrage (IPO) screaming bloody murder that that isn’t so. Oh, and you’ll be called a racist for your efforts as well.
The following article should serve as a warning to British politicians that not all is well within the UK police force, and that if they desire to stem the tide of discontent, they better scale back on the recruitment of Muslim police officers, and enforce a strict guideline that, the truth, and only the truth, will suffice in formulating and governing any official police policies. KGS
NOTE: It would also be wise for the British police force to investigate any possible connection between the National Association of Muslim Police and the Muslim Brotherhood. It would seem that their line of thinking mirrors greatly with the Islamic racist/supremacist organization just mentioned.
H/T Gaia

Muslim police say Islam not to blame for terror attacks

Muslim police officers have rebelled openly against the Government’s anti-terrorism strategy, warning that it is an “affront to British values” which threatens to trigger ethnic unrest.
The National Association of Muslim Police (NAMP) claimed that ministers were wrong to blame Islam for being the “driver” behind recent terrorist attacks.
Far-Right extremists were a more dangerous threat to national security, it said
The officers told MPs that Muslims were being “stigmatised” by the Government’s attempts to tackle terrorism, which was adding to “hatred” against entire communities.
In the official intervention, the association said the Government’s anti-terrorism policies could not “continue unchecked”.
The comments, made in a seven-page memorandum to a parliamentary committee investigating extremism, are embarrassing for Gordon Brown. They indicated that Muslim officers may be reluctant to take part in “hearts and minds” anti-terrorism campaigns.
The organisation, which represents more than 2,000 officers, was previously publicly backed by Mr Brown. The Prime Minister said the association was crucial to bridge the historic divide between Muslims and the police.