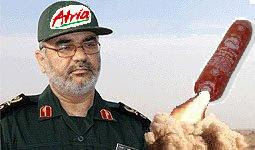 Gen. Hossein Salami:
Nothing but grade A coming your way

Israel of course has a few aces up its own sleeve. Barry Rubin has the latest info on what Israel is able to do to counter the Iranian threat, and derail it beyond anything the Iranians could imagine. KGS

TEHRAN (AP) – Iran said it successfully test-fired short-range missiles during drills Sunday by the elite Revolutionary Guard, a show of force days after the U.S. and its allies condemned Tehran over a newly revealed underground nuclear facility that was being secretly constructed.
English-language Press TV reported the Fateh-110, Tondar-69 and Zelzal were test fired in a missile defense exercise, but did not give specifics on range or other details. All are short-range, surface-to-surface missiles.
Gen. Hossein Salami, head of the Revolutionary Guard Air Force, told reporters Iran tested a multiple missile launcher for the first time. Press TV showed pictures of at least two missiles being fired simultaneously and said they were from Sunday’s drill in a desert in central Iran. In the clip, men could be heard shouting “Allahu Akbar” as the missiles were launched.
“The message of the war game for some arrogant countries which intend to intimidate is that we are able to give a proper, strong answer to their hostility quickly,” the Web site of state television quoted Salami as saying. He said the missiles successfully hit their targets.
Salami told reporters Iran had reduced the missiles and their ranges so they could be used in quick, short-range engagements. He also said Iran would test medium-range Shahab-1 and Shahab-2 missiles on Sunday night and long-range Shahab-3 missiles on Monday, during the drill set to last several days. The Revolutionary Guard controls Iran’s missile program.