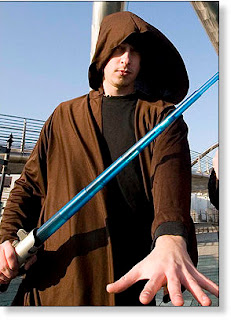 Loon, Daniel Jones: I hope so,
my cult is made up from a bunch of whiners as well!
And as can be expected, the members of the ROP cult will immediately seek take advantage of any court ruling that smiles favorably on Daniel Jones’ lawsuit. 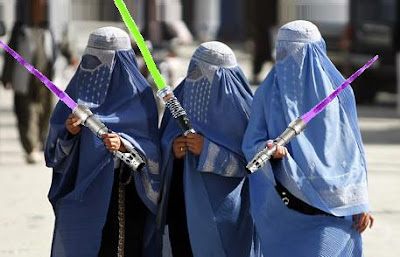 H/T: Gates of Vienna and Vlad Tepes
Here’s another example of why Muslim demands for Islamic sharia to be allowed in Westen society, needs to be consistantly rejected. Not only because sharia is an anti-modern, anti-democratic, anti-women/minority oppressive system, but by allowing it to take root here in the West, it will most certainly unleash a whole host of demands upon our societies by special interest groups who want “respect shown” for a whole range of issues that belong to their belief systems and/or ideologies. This is indeed a “Pandora’s Box” we don’t want opened. KGS
Jedi religion founder accuses Tesco
of discrimination over rules on hoods

Tesco has been accused of religious discrimination after the company ordered the founder of a Jedi religion to remove his hood or leave a branch of the supermarket in north Wales.

Daniel Jones, founder of the religion inspired by the Star Wars films, says he was humiliated and victimised for his beliefs following the incident at a Tesco store in Bangor.

The 23-year-old, who founded the International Church of Jediism, which has 500,000 followers worldwide, was told the hood flouted store rules.

But the grocery empire struck back, claiming that the three best known Jedi Knights in the Star Wars movies – Yoda, Obi-Wan Kenobi and Luke Skywalker – all appeared in public without their hoods. Jones, from Holyhead, who is known by the Jedi name Morda Hehol, said his religion dictated that he should wear the hood in public places and is considering legal action against the chain.

“It states in our Jedi doctrination that I can wear headwear. It just covers the back of my head,” he said.

“You have a choice of wearing headwear in your home or at work but you have to wear a cover for your head when you are in public.”

He said he’d gone to the store to buy something to eat during his lunch break when staff approached him and ordered him to the checkout where they explained he would have to remove the offending hood or leave the store.

“They weren’t listening to me and were rude. They had three people around me. It was intimidating.” Jones, who has made an official complaint to Tesco, is considering a boycott of the store and is seeking legal advice.

Tesco said: “He hasn’t been banned. Jedis are very welcome to shop in our stores although we would ask them to remove their hoods.

“Obi-Wan Kenobi, Yoda and Luke Skywalker all appeared hoodless without ever going over to the Dark Side and we are only aware of the Emperor as one who never removed his hood.

“If Jedi walk around our stores with their hoods on, they’ll miss lots of special offers.”