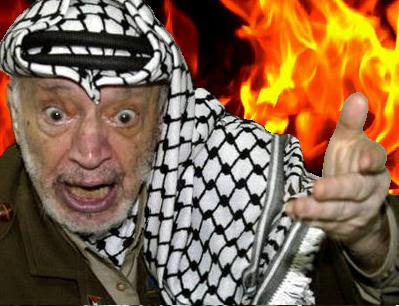 Arafat from Hell: Those Jews, those Jews!
No matter how much the Arabs love to lie about ancient Jewish history in the land of Israel, in order to cement their false claims…the facts -if you actually need even more evidence for the obvious- prove time and again that Jews have inhabited the land of Israel from time immemorial. To try and prove otherwise is a fools errand, but try they do, because in Fakestinian politics, telling outrageous lies is what passes for normal, as the following P.A. TV music video clearly shows:

JERUSALEM (CNN) — In what was slated to be the site of a new 122-room hotel, archaeologists say they have discovered one of the world’s oldest synagogues in Northern Israel.

The site, which was unearthed as preparations were being made for construction of the hotel near the Sea of Galilee, is believed to date back some 2000 years from 50BCE to 100CE.

In the middle of the 120 square meter main hall of the synagogue archaeologists discovered an unusual stone carved with a seven branched menorah . “We are dealing with an exciting and unique find,” said excavation director and Israeli Antiquities Authority archaeologist Dina Avshalom-Gorni.

The menorah engraving is the first of its kind to be discovered from the Early Roman period according Avshalom-Gorni who said the site joins just six synagogue locations that are know to date from the same time.

She said synagogues from this period were extremely rare in part because many Jews during that time were in the habit of visiting the main temple in Jerusalem three times a year as opposed to attending local houses of worship.

Avshalom-Gorni posited that the engraved menorah was done by an artist who had visited the main synagogue in Jerusalem known as the Second Temple where the actual menorah was believed to be kept.

In addition to the engraved stone Avshalom-Gorni said they discovered preserved frescoes on the walls with “vivid” colors.

The synagogue was discovered in area called Migdal, historically an important settlement along the Sea of Galilee, which researchers say was mentioned in ancient Jewish texts as playing a prominent role during what is known as the Great Revolt, when Jews attempted to rebel against Roman rule. Migdal also figures in early Christian writings as the place where Mary Magdalene accompanied Jesus and the Apostles.

Jose Miguel Abat, a legal representative for the company developing the land, Ark New Gate, said the company was thrilled at news of the find and planned to establish a multi-cultural and multi-religious center at the location.

“We are sure this finding and the planned center will attract tourists and visitors from Israel and from around the World,” Abat said in a statement