Atlas: Seven people were arrested for possession of offensive weapons including a hammer, a chisel and bottles of bleach. Police believe these arrests were not linked to the SIOE protest. (BBC) 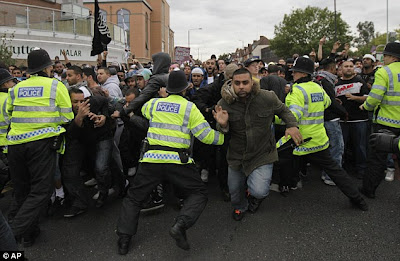 They will not tolerate dissent, Islam will refuse the non-Muslim the right to protest against it. So they do what they do best in quashing dissent, start a riot to help end the demonstration quickly.

LONDON (AFP) – Riot police intervened Friday to quell clashes between Muslims and anti-Islamic extremists protesting outside a London mosque on the anniversary of the September 11 attacks, an AFP correspondent said.

Police moved in after a crowd of angry Muslim youths, some wearing masks over their faces, threw sticks and stones at a small group of anti-Islamic protesters near the mosque in Harrow, northwest London.

“This is England, I should be able to demonstrate,” said one of the group of about a dozen mostly shaven-headed anti-Islamic protesters.

“I have got two sons in the army. They are out in Afghanistan fighting, but the police doesn’t (sic) want to defend us here today,” said the man in his late 40s, who declined to give his name.

In a tense atmosphere after initial clashes subsided, police surrounded the white demonstrators, to shield them from the angry Muslims some 500 metres (yards) from the mosque.

The demonstration near Harrow Central Mosque was organised by Stop Islamification of Europe (SIOE), which said ahead of the demo that it planned to remain peaceful.

Stephen Gash of the SIOE — whose motto is “Racism is the lowest form of human stupidity, but Islamophobia is the height of common sense” — said before the demo: “We don’t want any more mosques until all this hatred is sorted out.”

Concerns about violence have been heightened by clashes last weekend at a rally against Islamic fundamentalism held by a right-wing group, the English Defence League (EDL).

More than 30 people were arrested in Birmingham, central England, when the demonstrators fought with anti-fascist campaigners.

When things get quiet, I start a riot