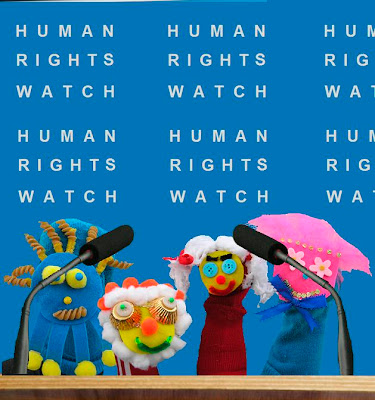 HRW Sock Puppets on the Internet:

Marc Garlaso is not Nazi!
Thanks to Harri for sending the Tundra Tabloids the following story. Human Rights Watch employees are rushing to the defence of the highly discredited Nazi memorabilia collector, Marc Garlasco, who works under the guise of “senior military analyst” for the pseudo human rights organization HRW, has apparently sent out the sock puppets in his defence.
As the Elder of Ziyon correctly points out: “Is this HRW’s idea of how to win friends and influence people in the new media? Because, to my mind, they just did the opposite. Sock-puppet messages are considered a gross breach of netiquette, and it indicates a certain dishonesty, not to mention puerility.”
Apparently HRW employees see no problem in passing themselves off as people unrelated to the organization that are upset over the supposed smearing of Marc Garlasco, but guess what, the claims about him are true,:
HRW’s Marc Garlasco: “That is so cool! The leather SS jacket makes my blood go cold it is so COOL!” –Flak88 (aka Marc Garlasco), wehrmacht-awards.com, 2005“
Head on over to Harri’s Place for the full story. The more one digs up on the HRW organization, the more there is less to like. KGS

NOTE: 88 is the secretive way of saying High Hitler, H is the 8th letter in the alphabet..this makes HRW’s Marc Garlasco a creep and a closet Nazi admirer.