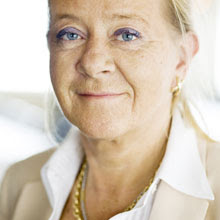 Elisabet Bonnier: In Sweden pro-Israel Jews should be not seen and definately not heard The first time the Tundra Tabloids came across the Bonnier name was in conjunction with a series of anti-Semitic op-eds that began appearing in the Finnish print media in 2007. One of the op-eds in question, ‘was troubled’ over the fact that the acquisition of Finland’s MTV broadcasting network by the Swedish Jewish owned, Bonnier AB , media group, was being labeled as a Swedish acquisition.

The strong Muslim presence in Stockholm makes the Jewish community there apprehensive about taking a public stand against the recent article in the Aftonbladet tabloid reporting Palestinian claims that IDF soldiers stole body organs from Palestinians, Rabbi Isak Nachman, the spiritual leader of two Orthodox synagogues in the Swedish capital, said on Sunday.Rabbi Isak Nachman.Photo: Courtesy of Judiska Forsamlingen I Stockholm “We want to combat this type of thing, but some Jews here are afraid – there are between 400,000 and 500,000 Muslims out of a population of about nine million,” said Nachman, a member of the Rabbinical Centre of Europe. “There is definitely anxiety and tension, especially at times when Israel is involved in a military operation, like Cast Lead,” he said. […]Most anti-Semitic statements were being made by local bloggers, he said. The latest subject being discussed by these bloggers was the alleged Jewish connection of Sweden’s ambassador to Israel, Elisabet Borsiin Bonnier.Bonnier, who called the Aftonbladet article “shocking and appalling,” was sharply criticized by Sweden’s Green Movement and by the country’s main opposition party. The Swedish government also distanced itself from her statement.Now, said Nachman, Bonnier’s marriage to a man who apparently has Jewish roots is being singled out for censure.”This is a very troubling development,” he said.Stockholm’s rabbi said that he was particularly disappointed with Sweden’s intelligentsia. “There are plenty of educated people who know about the history of blood libels and have remained quiet,” he said, adding that this non-action was in line with Sweden’s neutral stance during World War II.Nachman echoed criticism voiced last week by Foreign Minister Avigdor Lieberman. Nevertheless, Nachman said that the Jewish community still had not decided whether it would demonstrate against the article and against the Sweden government’s unwillingness to condemn the accusations voiced in it. Read it all..