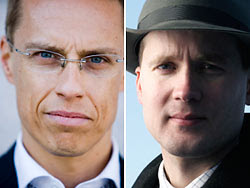 In other words, stop your whining.

The Tundra Tabloids would have preferred a full apology from the Finnish Foreign Ministry over its original statements concerning the bombing by Israel of a Gaza clinic that Finn Church Aid funded. Back in January of this year during the Israeli defencive Operation Cast Lead, the Finnish MFA said it condemned the Israeli missile strike.
A more thorough and well thought out response, would have been a full condemnation of Hamas’ forces that commandeered the medical facility to launch an armed attack against Israeli IDF troops, which was in fact, a war crime. The damage that ensued from the Israeli response was the full responsibility of the Arabs themselves, not Israel, which was forced to open fire on an enemy force, an action by the way, that’s fully backed by the rules of engagement in the Geneva Conventions.
This is the way Scandinavian Foreign Ministries admit that they were wrong, by not pursuing the matter any further. The Israeli Ministry of Foreign Affairs has made public its report on Israel’s actions inside Gaza during the fighting in Operation Cast Lead. The Tundra Tabloids believes that that report is responsible for the Finns change in tune, not any supposed free advertisement for Finn Church Aid’s own activities.
Antti Pentikäinen is a fool.
He promotes the absurd myth that Israel’s operation inside Gaza included “organised attacks against humanitarian sites“. Any serious reading of what took place, and the strict rules of engagement that the IDF employed in its fight against Hamas operatives during the fighting, would dispel any such fanciful thinking. He’s been duped (willingly?) by the NGO’s who are all pro-Palestinian and repeat their lies without the batting of an eye. KGS

The managing director of Finn Church Aid, Antti Pentikäinen, said a recent comment by Finnish Foreign Minister Alexander Stubb on the destruction of a clinic partly funded by Finn Church Aid in Gaza was thoughtless. According to YLE’s Swedish News, Stubb said on Wednesday that opening the door to discussions of the health clinic bombing would be free advertising for the Lutheran organisation.

Stubb said Finn Church Aid wants to advertise its work by calling for a thorough investigation into the destruction of the clinic. The clinic, located in Gaza, was destroyed in an Israeli missile strike in January.

Stubb added that Finn Church Aid wants to bring attention to its own brand.

”If that were not the case, then it would demonstrate that Stubb does not really understand what is going on in the war in Gaza, how vast the destruction is, and how organised attacks against humanitarian sites are,” Pentikäinen said.

In an official press conference, Stubb said that the Israeli attack against the clinic has been investigated.

”We have decided that the investigation from our side is over. We condemned the attacks then, and we condemn them still. We have a difficult time verifying Israel’s account because we were not there,” Stubb said.