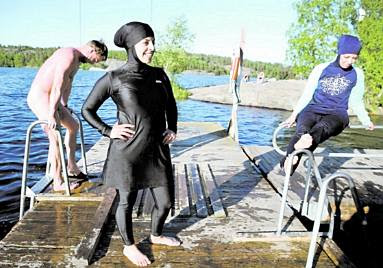 Outdoors: It’s whatever floats your boat
UPDATE: [The Tundra Tabloids is reminded of other Muslims who could care less whether or not they contaminate others, due to their political/religious ideology. In Britain, some hospital workers were complaining about washing their hands with liquids that has an alcohol base, they said using it violated the edicts in their Koran.]

Of course it’s got to be a convert to Islam to push the supposed right to wear a costume that contaminates everyone else that swims in the pool. France seems to swim in the right direction where Islamic coverings are concerned.H/T: ESW
Muslim woman barred from Paris pool for `burquini’

PARIS – A Muslim woman who tried to go swimming in a head-to-toe “burquini” has been banned from her local pool in the latest tussle between religious practices and secular authority in France.

Officials on Wednesday insisted they banned the woman’s use of the Islam-friendly swimsuit because of France’s unusually strict hygiene standards in pools — not because of official hostility to wearing overtly Muslim garb.

Under the policy, swimmers are prevented from wearing any street-compatible or baggy clothing, such as Bermuda shorts, in favor of figure-hugging suits.

The woman, a 35-year-old convert to Islam identified only as Carole, complained of religious discrimination after trying to go swimming in her burquini in the Paris suburb of Emerainville.

She was quoted as telling the daily Le Parisien newspaper that she had bought the burquini after deciding “it would allow me the pleasure of bathing without showing too much of myself, as Islam recommends.”

“For me this is nothing but segregation,” she added.

The issue of religious attire is a hot topic in France, where head-to-toe burqas or other full-body coverings worn by Muslim fundamentalists are in official disfavor.

But Daniel Guillaume, a regional official in charge of swimming pools, said Carole’s poolside rebuff had nothing to do with religion and everything to do with public health standards.

He said swimmers throughout France must wear special clothes to the pool, whereas a burquini could be worn all day long, collecting everything from food spills to sweat along the way.

“These clothes are used in public, so they can contain molecules, viruses, et cetera, which will go in the water and could be transmitted to other bathers,” Guillaume said in a telephone interview.

“We reminded this woman that one should not bathe all dressed, just as we would tell someone who is a nudist not to bathe all naked,” he said.

Guillaume said France’s public health standards require all pool-goers to don appropriate attire — swimsuits for women and tight, swim-specific briefs for men — and caps to cover their hair. Bathers also must shower before entering the water.

Guillaume said Carole had tried to file a complaint at a local police station, but her request was turned down as groundless.

Carole told the daily Le Parisien she would protest with the help of anti-discrimination groups.

The Associated Press could not reach the woman for comment Wednesday.