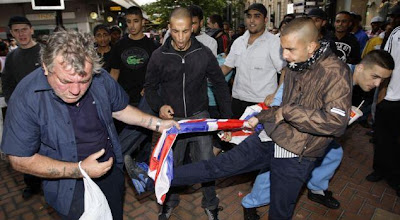 Muslims showing distate for the Union Jack These anti-Islamization demonstraters were not BNP supporters, so the pro-Islamization squad were blowing smoke through their rears. I like particularly the Black and white unite signs. Aeneas has more at Beer & Sandwhiches. KGS
Mass brawl between right-wing group and
anti-fascists as race riots spill onto streets of Birmingham

Police arrested 33 people during a clash between anti-fascists and a right-wing group as the centre of Birmingham turned into a war zone yesterday.
Terrified shoppers cowered in fear as a group came into violent contact with Unite Against Fascism marchers in a violent brawl that dominated the streets.

The so-called English and Welsh Defence League and Casuals United formed after British soldiers were abused by Islamic radicals at a homecoming parade in Luton earlier this year.
But Unite Against Fascism claim that the Casuals are made up of members of far-right groups and had planned to cause racial unrest in the city.

Two people were injured, according to West Midlands Police, and there were several reports of criminal damage including a car.

A spokesman said although no formal request to march was submitted, they were aware of a group who planned to visit Birmingham to protest against Islamic fundamentalism.

Discussion and planning on online social networking sites led police to believe the group involved was the English and Welsh Defence League, or Casuals United.

The spokesman said it was aware of speculation that the group is linked to the British National Party (BNP), but no information or intelligence had been received to support that.

The group’s website refers to itself as “an alliance of normal British people of various different colours/races who have come together in order to create a massive, but peaceful protest group to force our Government to get their act in gear.”

A special post about the Birmingham demonstration called for supporters to make their voices heard but not get involved in violence.
It said: “If attacked we defend ourselves but we are there for a PEACEFUL PROTEST.”

UPDATE: Vlad has uploaded a video of the rally