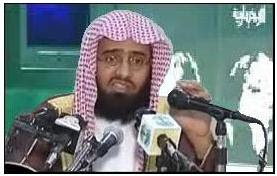 Saudi Noose:We have this sense of piety that’s a total fraud
but we like it to control every aspect of our lives
Being open about sex in Saudi Arabia will not only land you in the clink, it will get you an umpteenth number of lashes for your troubles as well. It’s such a taboo issue -though the Saudis are notorious for their sexual escapades abroad- that even talking about it on a foreign station will land you in hot water at home. When homosexuality is allowed in the ‘Kingdom’, we will know that the Jihad is no longer a threat. KGS
Saudi closes broadcaster after sex confession

RIYADH (Reuters) – Saudi Arabia has closed the Jeddah office of a Lebanon-based television network after it aired an interview with a Saudi man speaking about his sexual escapades, a government spokesman said on Sunday. Mazen Abdul-Jawad, 32, was arrested last month in the Red Sea city of Jeddah after shocking Saudi Arabia, one of the most conservative countries in the world, by recounting details of his sexual exploits on Lebanese channel LBC.

The divorced father of four spoke to camera from his bedroom in Jeddah about how couples can spice up their sex lives.

A spokesman for the ministry of culture and information in Riyadh said a committee had decided to close the Jeddah office of LBC because of the interview.

The daily al-Watan newspaper said authorities also closed other offices of LBC, which is mainly owned by Saudi billionaire Prince Alwaleed bin Talal, in the kingdom.

Abdul-Jawad has been charged with publicizing vice and lawyers say he may face the death penalty.

Like many Arab countries, Saudi Arabia prohibits sexually explicit content on television and in newspapers, magazines and books.