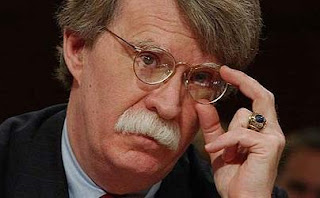 John Bolton:“…the ICC process simply provided a fig leaf for the Europeans, who wanted to avoid any serious action about Khartoum, while pointing to the ICC as “doing something.”
The ‘open handed diplomacy’ (read= no clenched fists) of the Obama administration is presently, running into problems with thug regimes who care less for human rights. The fact is, rogue regimes, like N.Korea, Zimbabwe, Mynamar, Cuba, Iran and Syria have more to gain from the recognition the world’s only super power gives, than the other way around. The Left’s fixation with world organizations and single government rule is sickening to watch, but then again, it’s also insrtuctional to watch as well. Former US Ambassador to the UN, John Bolton descibes his observations concerning the actions of the International Criminal Court in connection with the genocidal Sudanese government, and what should be done to set things on the proper course. KGS