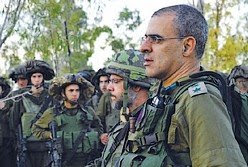 “If Hamas had fought with us in open fields and orchards, we would have fought with it there,” he says. “But when they fire an RPG at you from inside a house and you then find an IED [improvised explosive device], grenades and machine guns inside, what does this mean?”
For those of us who understand how the IDF really works, its strict military codes and the strong sense of morality and discipline that’s drilled into every one its soldiers, know very well that the lion share of the Fakestinians’ propaganda (that parades itself as NGO facts) could never be true. Those who are willing to entertain such nonsense as fact, either have an agenda or are just grossly naive. It can’t be any other way.
Enter Israeli IDF Col.Illan Malka, commander of the Givati Brigade, who delivers an eye opening account of what took place in Gaza earlier this year, and from the ground, because “he was there”. The Tundra Tabloids trusts Col.Malka’s version not just because he was there, but because he can most certainly back up what he says with black and white facts. Funny how the MSM treats IDF facts as suspect, but treats Fakestinian sources as credible no matter how many times they have been found to have been faulty or outright lies. KGS
NOTE: The last paragraph was especially for SKY NEWS’ Tim Marshall

The day after Operation Cast Lead ended in mid-January and amid growing international criticism of the alleged lax rules of engagement during the fighting, the IDF decided to hold a press conference to respond to the accusations.

The venue chosen was a small IDF base located adjacent to the Sde Teiman airstrip just northwest of Beersheba. The officer chosen to give the briefing was Col. Ilan Malka, commander of the Givati Brigade, who had left Gaza the night before after spending two weeks deep inside the Strip commanding dozens of daily operations against Hamas.

Malka, 41, a graduate of the National Defense University in Washington, is part of the new generation of IDF brigade commanders who came of age in the post-Second Lebanon War era.

If during the 2006 war some brigade commanders stayed back in Israel, overseeing the fighting from secure bunkers, during Cast Lead, Malka and his counterparts from the Golani, Paratrooper and 401st brigades were all on the battlefield with their men.

At Sde Teiman, Malka stood before reporters in front of weaponry IDF troops had captured during the operation, including anti-aircraft cannon, Kassam launchers and antitank missiles.

“We did not exaggerate in our use of firepower,” Malka maintained. “I will not send 10 soldiers into a house that is suspected of being booby trapped so they can all [be blown] up inside. If Hamas wants to protect the family inside, it shouldn’t have booby trapped the home.”

“If Hamas had fought with us in open fields and orchards, we would have fought with it there,” he says. “But when they fire an RPG at you from inside a house and you then find an IED [improvised explosive device], grenades and machine guns inside, what does this mean?”

But, Malka says, things were not that clear and in a vast majority of engagements, his troops held their fire, at their own risk, to avoid harming innocent civilians.

“The moment we found weaponry in the house, we began sweeping it with selective fire,” he said. “You can sweep a house slowly, but then you will lose soldiers. Therefore we took many steps to prevent our soldiers from getting hurt.”

Those steps mostly paid off. While 10 soldiers were killed during the two-week ground operation, Malka reveals that initial IDF predictions were that each battalion would lose six or seven.

Hamas, like Hizbullah, knows that Israel’s weak point is when fighting in urban centers amidst innocent women and children, he says, referring to cases when mothers were sent to blow themselves up next to troops or children were sent down a street to retrieve a dead terrorist’s weapon.

“Hamas tried to bring out our weak side, and that is why it hides behind the civilian population,” he says. “The Gaza urban centers are the playing field that it chose and where it believes that it can cause Israel damage internationally and achieve something of a victory.”

Under Malka’s command, the Givati Brigade penetrated the deepest into Gaza City. In a meticulously planned mission launched two days before the cease-fire went into effect, the brigade’s reconnaissance battalion swept into the Tel el-Hawa neighborhood and took over two 15-story buildings in search of Hamas operatives.

The operation put soldiers just 500 meters away from the home of senior Hamas leader Mahmoud a-Zahar and a kilometer from Shifa Hospital, where most of the Hamas leadership, including Prime Minister Ismail Haniyeh, were believed to be hiding. Forty Palestinian gunmen were reportedly killed during the maneuver, which entailed climbing hundreds of stairs and sweeping dozens of apartments. READ IT ALL.