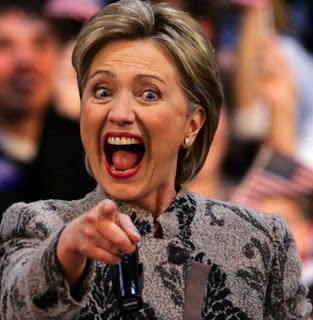 Hillary dillary: My statement in ‘Phuket‘
did not contain a hidden meaning!This administration is full of novices, starting from the bogus POTUS and working its way down, as an ex-pat American, it’s extremely embarrassing to watch. The latest salvo fired across the Israeli bow, was Ms.Clinton’s statement:‘Dillary’: “We want Iran to calculate what I think is a fair assessment: that if the US extends a defence umbrella over the region, if we do even more to support the military capacity of those in the Gulf, it is unlikely Iran will be any stronger or safer,” Pure novice thinking, and something that the Iranians can be counted on to use to their own advantage on the domestic level. Who does she think she’s kidding, it’s a veiled threat to Israel that the US is seriously considering the possibility of living with the fact that Iran will go nuke in the near future. This is pure US politics vis-a-vis the Jewish state out in the open. KGSClinton stirs Israeli fears US will accept nuclear Iran

Secretary of State Hillary Clinton on Wednesday stirred Israeli fears that Washington would accept a nuclear armed Iran when she raised the idea of a US “defence umbrella” for Gulf allies. However, Clinton, during a visit to Thailand for an Asian security conference, said later that she was not announcing a new policy and simply wanted to turn Iran away from pursuing a nuclear weapon. Clinton told Thai television in Bangkok that President Barack Obama’s administration was still open to engage Iran in talks about its nuclear programme but warned that Tehran would not be safer if it obtains a bomb.

We will still hold the door open” to talks over its nuclear program Clinton said.

“But we also have made it clear that we will take action, as I’ve said time and time again, crippling action, working to upgrade the defence of our partners in the region,” she said.

Her previous references to “crippling action” have referred to sanctions.

“We want Iran to calculate what I think is a fair assessment: that if the US extends a defence umbrella over the region, if we do even more to support the military capacity of those in the Gulf, it is unlikely Iran will be any stronger or safer,” Clinton said.

“They won’t be able to intimidate and dominate as they apparently believe they can once they have a nuclear weapon.”

“I heard without enthusiasm the American declarations according to which the United States will defend their allies in the event that Iran uses nuclear weapons, as if they were already resigned to such a possibility,” he said.

“This is a mistake,” Meridor said. “We cannot act now by assuming that Iran will be able to arm itself with a nuclear weapon, but to prevent such a possibility.