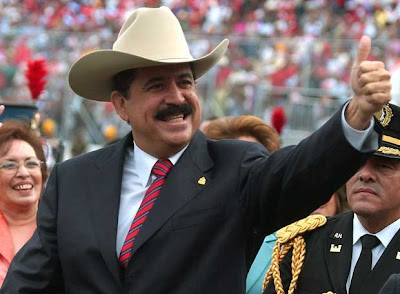 What’s your millions are my millions!

And Obama, Chavez, the Castro borthers and the UN want to see the return of the highly corrupted, Honduran constitution busting former president, Manuel Zelaya, returned to office. It’s disgusting to observe the US falling into line with the Leftist states and their corrupted international organization the UN, but that’s what’s happening.

It’s the personal view of the Tundra Tabloids that the descredited former president should be allowed to return, then promptly arrested and thrown in the clink to await trial for grand theft and subversion of the Honduran constitution. I would love to see the thieving socialist convicted on all charges and given a long jail sentence, just to see what the magic negro would say about the man he supported. Atlas has the details: ON CAMERA: Security video from the Central Bank of Honduras shows aides to President Manuel Zelaya withdrawing large sums of cash before he was overthrown. Video here.

Does Obama back anyone who ain’t a thug, a crook, or a despot? Just asking.

Zelaya planned to use the stolen millions in connection with the illegal referendum that would have given him another term (at the least). Mind you, Honduran authorities seized computers in the Presidential Palace belonging to Mel Zelaya that contained the official and certified results of the illegal constitutional referendum Zelaya wanted to conduct, but which never took place. The results of this fraudulent vote were tilted heavily in Zelaya’s favor.