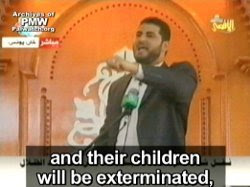 Islamic supremacist-genocidal leader Ziad Abu Alhaj:
“The time will come, by Allah’s will, when their property will be destroyed and their children will be exterminated, and no Jew or Zionist will be left on the face of this earth.”
And there you have it folks, another prime example of a Muslim cleric chumming it up with his supposed peers, when in reality, he doesn’t believe them to be his equals, but vermin and refuse that needs to be dealt with. From Palestinian Media Watch, that indispensable organization that translates what the Palis are saying to each other.

PMW: A Hamas cleric who once participated in an international conference of “Imams and Rabbis for Peace” — whose delegates vowed to “condemn any negative representation” of each other’s religions — has wholeheartedly espoused Hamas’s racist ideology in a recent Friday sermon on Hamas TV.

Ironically, this latest profession of Hamas’s genocidal racism was preached and broadcast at the start of the month in which the UN is meeting in the “Durban II” conference in Geneva to condemn Israel as being “racist.”

According to the Hamas interpretation of Islam, the Jews are inherently evil, seek to rule the world, and are a threat to Muslims and all of humanity. Therefore they are destined to extermination. In the words of Hamas religious leader Ziad Abu Alhaj, “Hatred for Muhammad and Islam is in their [Jews’] souls, they are naturally disposed to it…”

He asserts that because of the Jews’ inherent evil, the Jewish state, “Israel … is a cancer that wants to rule the world.” One can find the details of the Jews’ plan in The Protocols of the Elders of Zion, which he jokingly refers to as “The Protocols of the Imbeciles of Zion” (a play on words in Arabic). He concludes that the Jews are destined to be annihilated:

He also claims that the Jews wanted to murder Muhammad.

This imam, who is preaching the genocide of Jews, participated in the Second World Congress of Imams and Rabbis for Peace in 2006, which also featured many prominent rabbis from Israel. The final statement from the Seville conference included the pronouncement, “. . . We condemn any negative representation of these [religious beliefs and symbols], let alone any desecration, Heaven forbid. Similarly, we condemn any incitement against a faith or people, let alone any call for their elimination, and we urge authorities to do likewise.”

NOTE: The TT respects PMW, but it has to be said. The Hamas are not interpreting Islam “in their way”, which regards the Jews as the enemy of Islam. It IS Islam, which all the authoritave voices in Islamic orthodoxy give approval of, you need to look no further than to Grand Imam of Al-Azhar University in Cairo, Sheikh Muhammad Tantawi.
The Tundra Tabloids dear friend, Andy Bostom writes of Tantawi: “My forthcoming book The Legacy of Islamic Antisemitism includes extensive first time English translations of Tantawi’s academic magnum opus, Jews in the Koran and the Traditions. Tantawi wrote these words in his 700 page treatise rationalizing Muslim Jew hatred”:

[The] Koran describes the Jews with their own particular degenerate characteristics, i.e. killing the prophets of Allah [Koran 2:61/ 3:112], corrupting His words by putting them in the wrong places, consuming the people’s wealth frivolously, refusal to distance themselves from the evil they do, and other ugly characteristics caused by their deep-rooted lasciviousness…only a minority of the Jews keep their word {Koranic citations here]….[A]ll Jews are not the same. The good ones become Muslims {Koran 3:113], the bad ones do not.