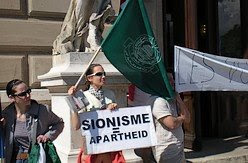 That pretty much sums up the high level retarded thinking of these so called “peace and human rights” activists. So much self inflicted mental retardation in one arena must be unbearble to watch, the Tundra Tabloids is glad it won’t be there to cover it. They got one thing right though, they are indeed all Hamas and Hezbollah, from the fuzzy kefiyyeh, right down to the shine on their black jackboots. What a bunch of MAROONS. KGS

A parallel meeting to Durban II which was organized by the International Jewish Anti-Zionist Network, the International Coordinating Network on Palestine and the Boycott, Divestment and Sanctions (BDS) Committee, kicked off at a Geneva hotel Sunday, one day ahead of the United Nation’s conference on racism.

Some 160 participants attended the conference, entitled the Israel Review Conference: ‘United Against Apartheid, Colonialism and Occupation, Dignity & Justice for the Palestinian People.’