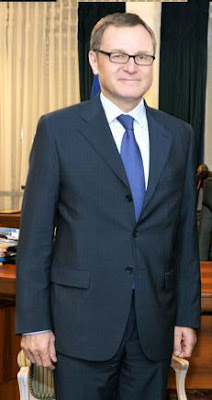 Hannu Himanen Finnish Ambassador to Durban II:
Finland plans to hide behind the skirts of the EUFor the Finnish government, it’s not about doing what is right, but doing what is politically expedient that counts. Take it from the Tundra Tabloids, the Finnish government has been inundated with calls, and private meeting with people the TT knows personally, to do the right thing, and stay away from the conference. They won’t budge, they want to attend the anti-anti-racist conference like little faithfull lap dogs. Disgusting to witness.EU Mulls Attending Racism Conference

The EU countries will meet on Monday morning in Geneva to negotiate a common line of the UN Racism Conference. Finland considers it important meeting and is seeking that all the European countries will participate in it. Several countries have announced boycott the meeting. It is due to the draft statement, in which, particularly for the United States has criticized Israel unfairly.Ambassador Hannu Himanen, Finnish delegation leader to the Racism conference said that Finland’s participation in the meeting is dependent on the EU’s line. The decision of EU countries’ participation is to be made by Monday morning at the meeting of representative leaders.