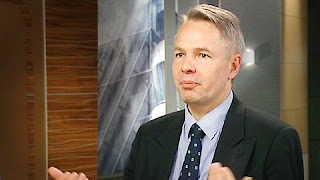 Pekka Haavisto: Jihad…what’s that, I never heard of it?

According to Pekka Haavisto who was interviewed on today’s YLE morning program, Somali piracy has everything to do poverty, and the spoiling of Somali’s fishing coast by the international community, “the jihad” was not mentioned once. It’s an often mentioned reason to explain why the Somali coast has become a magnet for ship seizures by Somali terrorist/jihadis.

Haavisto: Pirates come from Somalia’s northern parts. They are seeing a proliferation of poor young men without work, and piracy has been a way to get revenue, “said Haavisto YLE Morning TV interview. According to Haavisto, the local pirates justify the fact that the area has been, for example, a scene of illegal fishing and toxic dumping. Now the locals want to take back what they have been taken from them.

-Of course it is the wrong way to try to raise their standard of living through crime. Even the pirates’ business transactions should be stopped, because piracy is considered the country main productive business activity. After all it is a special feature that the action (piracy) is seen as a business. It is said that a hijacking is invested with half a million dollars and asked, how couldn’t a ten million dollar ransom be demanded, describes Haavisto.

According to such thinking, it’s the international community’s fault, the Somalis are only, in part, to blame for having been forced to take to the high seas and prey on international shipping. Oh really? A Finnish TV program, MOT, had sent a team of Finnish/Somali journalists to Somalia last year, to seek the reasons behind the rise in piracy in the area of the city of Eyl. It provides an interesting side to the story, which the Tundra Tabloids believes was totally unintentional.

The assertion that abject poverty is a problem that has led to piracy is only partly correct. Indeed, the locals living in the Eyl area have fallen on hard times, but as someone stated in the MOT video (in Finnish), the local fishermen can be divided up into two categories, those who left to farm and to raise livestock, and those who took to piracy. But that only explains the local mentality, what is mentioned later on here and there in the documentary, but never fully explained, is the fact that “northerners” have taken over the area and bear the greater responsibility for the rise in piracy. 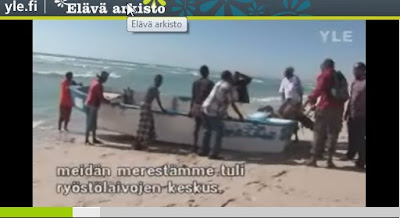 Text: “Our ocean has become the center for piracy.”

Village leaders are seen complaining that their area is now best known for robbery on the high seas, and that they can do little to stop them. But what they don’t dare mention, is that the “northerners” are in fact the Al-Shabaab, a group of jihadists in Somalia that adhere to a strict form of sharia. The Al-Shabaab is an al-Qaida affiliate that is using the locals to help out with the funding of their jihad, as well as being allowed to earn a wage.

Contrary to what Haavisto and other politicians/bureaucrats like him are saying, this is not a simple case of simple fishermen being forced into illegal activities becuase there is nothing left to do. As the documentary states, other fishermen chose to do other legal occupations. I greatly suspect that the al-Shabaab started the acts of piracy and then demanded full cooperation by the locals,.. or leave. The ones who stayed, now form the backbone of the operation as the more (now) wealthy jihadi/pirates sub-contract the brunt of the work to others.

I don’t doubt that many of the traditional Somali tribal leaders want a return to the way things were, but lets be realistic here, the organizers of the Somali piracy trade are the ones who are promoting jihad, and use whomever they can, willing or not, to fuel their racket. The jihadists control the coast, and out politicians have to be a bit more sophisticated in detailing what the problems are, and why they exist, and who benefits from it the most. KGS