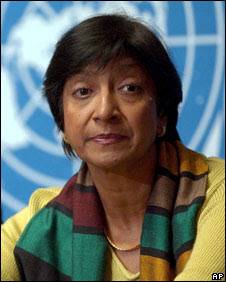 I welcome the new 17 page text that reaffirms
the anti-Semitic conclusions of the 2001 Durban Conference.
Being anti-Israel is a UN right, did you expect anything different!

For those who follow the issue of the upcoming Durban II conference in Geneva, you won’t be surprised by the news that the newest version of the draft text for the conference, is as bad, or worse than the original. It’s going to be a trash and bash event, something of which the Tundra Tabloids pointed out to the OIC’s chairman, Ekmeleddin Ishanoglu when he visited Helsinki last year.

TT: “In light of the US Congress resolution, Can OIC sec-Gen offer his own personal assurances that the O I C is not going to use the conference, to attack Israel…?” That Ihsanoglu refused to give his assurances last October, goes to underline the OIC’s agenda for the Durban II conference.
Israel: Durban II text is getting worse

Israel said that the newest version of the draft text for next week’s anti-racism conference released Wednesday in Geneva was worse than the previous one when it came to singling out Israel.
“The new text is not an improvement. If anything it is worse than the previous text because it includes a reference to foreign occupation which in the diplomatic world is code for Israel,” Israel’s Ambassador to the United Nations in Geneva Roni Leshno Yaar told The Jerusalem Post by phone.
In addition, he said, in its opening paragraph the new text continued to reaffirm the conclusions of the 2001 United Nations World Conference Against Racism, Racial Discrimination, Xenophobia and Related Intolerance that met in Durban, South Africa. That text singled out Israel. “We are worse off than we were yesterday,” Leshno Yaar added.

Nothing has changed, the OIC run conference is marching ahead as planned, with its entire focus being on Israel, while states with real human rights abuse problems will be standing in judgement. It doesn’t get any more Orwellian than that, but that is the state of affairs at the UN. KGSUPDATE: A must read, tells exactly what the TT has been saying all along: Another Long March Through The UN “In 1997, OIC members, including Pakistan, Indonesia, Egypt, Algeria, and Bangladesh, among others, similarly took umbrage at investigations of anti-Semitism, and accused the UN special rapporteur on racism of ‘blasphemy’ for reporting on anti-Semitism in Muslim countries. Consequently, in the next report on racism, in 1999, the section on anti-Semitism mentioned specifically only Eastern Europe and the former Soviet Union as problem areas. Thus, in apparent deference to many Muslim countries’ claimed privilege, the Human Rights Commission exempted an entire region of the world from scrutiny on anti-Semitism. Under similar pressure from the OIC bloc, in 2002, the Commission terminated the mandate of its special representative on human rights in Iran. “That’s what OIC Secretary General, Ekmeleddin Ihsanoglu was doing in Helsinki Finland last October, 2008, denying the existence of Muslim anti-Semtism. KGS