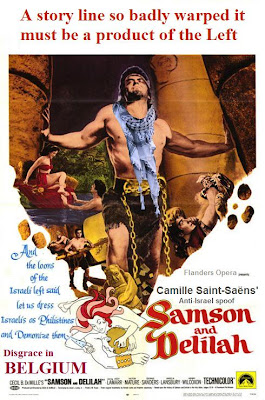 Interesting to see the Swedish car maker, Volvo, being mentioned as one of the companies sponsoring the “glorifying-of-the-murder-of-Jews” opera. It was in 2004 in Sweden, that Israeli Ambassador Zvi Mazel, chucked a lamp into the Snow White and the Sea of Madness, in order to express his disgust.

Local Belgian Jews aren’t amused either, rather they’re outraged over the intended perfomance, that takes the Jewish historical narrative and turns it on its ear. These Israeli traitors are the lowest of the low, choosing the Flemish Opera House in Antwerp that’s just a stones throw away from the Jewish Community. How typical. KGS

You will be happy to hear that two pro-terror Israelis, a Jew and an Arab, will be staging an opera in Belgium that celebrates Palestinian suicide mass murder of Jews.
This is not a spoof.

The opera in question is based on the classic Samson and Delilah opera by Camille Saint-Saens, except that in this case Samson will be dressed as a Palestinian when he commits suicide in order to mass murder the Philistines, who in the opera are … (you guessed it) … the Israelis.

This celebration of suicide bombing and genocidal mass murder is to be staged by one Omri Nizsan with his Arab sidekick from the Galilee Amir Nizar Zoabi (probably a Bedouin, based on his name). The Jewish victims of the Philistines will be dressed as Gazan Arabs and identified as such. Samson is to be represented as the first “shaheed” or mass murderer through suicide terrorism. The producers claim it is all to be a protest against “occupations,” including in Palestine, Iraq, and Afghanistan.

The “opera” is to be staged at the Flemish Opera House in Antwerpen, just steps away from the city’s large Jewish community. The location is ideal in case any in the audience decide to apply the ideas being communicated in the show and go out to murder a lot of local Jews. The Flemish Opera House is now directed by a self-hating leftist anti-Israel Jew (born in Zurich) named Aviel Cahn. His qualifications for running an opera are that he graduated from law school. (For more, see this : http://www.flanderstoday.eu/content/jewish-outrage-samson-opera ) Evidently an Israeli flag is to be burned in the show.

You may want to ask Mister Cahn why he is not staging an opera celebrating the rape of Belgium by the Kaiser in World War I, in which Belgium is shown as Chamor son of Shechem, while Germany is Dina. That should amuse the Belgians even before the fat lady sings.