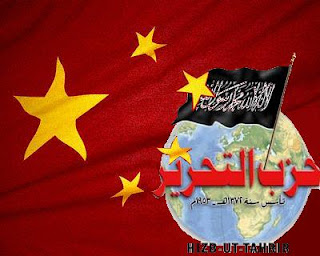 Ah so! The Chinese are now experiencing the same kind Islamist shin kicking the rest of the world has been experiencing for some time now.
Muslim militants within the Xinjiang region are calling for an independent Muslim state called ‘East Turkestan’, to be carved out of the Chinese Republic. Hizb ut-Tahrir is being blamed for the sudden “awakening” within the Chinese Islamic community, and the Beijing government is stepping up it response to meet the threat.
YNET: In a backstreet of the old Silk Road city of Kashgar, the Chinese government has been spray-painting signs on dusty mud brick walls to warn against what it says is a new enemy—the Islamic Liberation Party.
Better known as Hizb ut-Tahrir, the group says its goal is to establish a pan-national Muslim state, or Caliphate. China says Hizb ut-Tahrir are terrorists, and claim they operate in the far western region of Xinjiang, home to some 8 million Muslim, Turkic-speaking Uighurs, many of whom chafe under Chinese rule. But the group, and some observers, say they do not espouse violence, and they accuse China of playing up the threat as an excuse to further crack down in restive Xinjiang, especially ahead of this summer’s Beijing Olympics.
“Strike hard against the Islamic Liberation Party” and “The Islamic Liberation Party is a violent terrorist organization” read the signs in Kashgar, written in red in both Chinese and Uighur’s Arabic-based script.”
While the Tundra Tabloids has absolutely no sympathy for Communist Chinese government, the need to resist the Islamists anywhere they start to raise their fists is of vital importance. I do not foresee any great gains made by the Islamists in China, since the totalitarian Chinese regime is more than ready to quash any kind of resistance to their iron rule.
It’s also unsettled just how united the Muslims are in the area, as well as Beijing’s motives in naming Hizb ut-Tahrir as a terrorist organization, since they (HUT) emphatically renounce the use of violence in acheiving their goals. But never the less, the goals of the Hizb ut-Tahrir dovetails with that of Al-Qaida’s, which in the end, spells more misery for the people of China.
The best scenario possible would be for the Chinese to join the democratic world, but lets hope they stamp out their Islamist problems before they do. More here. *L* KGS