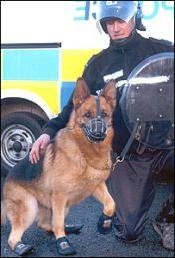 The British Police have been honing up on their sensitivity training, with their latest exercise in “leaning over backwards” to Muslim sensibilities, going way overboard…again.

Police sniffer dogs will have to wear bootees when searching the homes of Muslims so as not to cause offence. Guidelines being drawn up by the Association of Chief Police Officers (Acpo) urge awareness of religious sensitivities when using dogs to search for drugs and explosives. The guidelines, to be published this year, were designed to cover mosques but have been extended to include other buildings.

Where Muslims object, officers will be obliged to use sniffer dogs only in exceptional cases. Where dogs are used, they will have to wear bootees with rubber soles. “We are trying to ensure that police forces are aware of sensitivities that people can have with the dogs to make sure they are not going against any religious or cultural element within people’s homes. It is being addressed and forces are working towards doing it,” Acpo said. Problems faced by the use of sniffer dogs were highlighted last week when Tayside police were forced to apologise for a crime prevention poster featuring a german shepherd puppy, in response to a complaint by a Muslim councillor.

But here is a reason why some (if not most) Muslim complaints over their religious sensibilities being violated, should be given a stiff arm. One of Britain’s leading Imams said that the police are over reacting to the complaints.

“Ibrahim Mogra, one of Britain’s leading imams, said the measures were unnecessary: “In Islamic law the dog is not regarded as impure, only its saliva is. Most Islamic schools of law agree on that. If security measures require to send a dog into a house, then it has to be done. I think Acpo needs to consult better and more widely. “I know in the Muslim community there is a hang-up against dogs, but this is cultural. Also, we know the British like dogs; we Muslims should do our bit to change our attitudes.” One of the rare times I can see eye to eye with an Imam. Muslims living in the west must conform to the habits and attitudes of the host society. The banning of images of pigs and the refusal of taxis to give rides to blind people with their seeing eye dogs, all because it offends Muslim sensibilities….cannot be tolerated. The British police should heed the wise words of this Imam concerning this situation. More here. *L* KGS