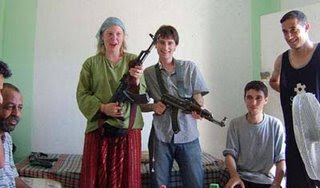 The open nexus that exists between the “peace activist” crowd, the media and the terrorists themselves, couldn’t be any more plain. That is the one of the reasons this conflict is so grossly misrepresnted, misunderstood and has lasted for so long. The “peaceniks” and the media are a part of the conflict, as the above picture accurately shows. *L* KGS