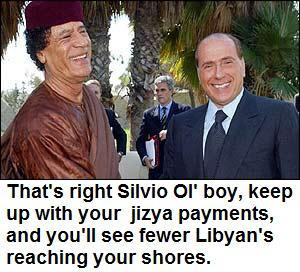 The European politicians just love to please “the South”, so why wouldn’t the Muslims accept more jizya flowing their way? I wonder if Silvio has thanked Gadaffi for the second rate status bestowed upon him and the rest of Italy? It’s a gift that keeps on giving, dhimmitude, slavish servitude with a smile!
ANSAmed – ROME, JUNE 27 – The issue regarding the fight against illegal immigration was at the centre of the lightning visit which Italian Prime Minister Silvio Berlusconi paid in Libya today and during which he met Libyan leader Colonel Muammar Gaddafi. The talks, which lasted a little more than two hours and a half, took place in a tent on the sea coast in Sirte, 600 kilometres east of Tripoli. It was Berlusconi’s first travel abroad for a bilateral meeting since his return to head of the government. As Italian Interior Minister Roberto Maroni had revealed, the visit was intended to discuss the implementation of an accord to fight illegal immigration, news agency AFP reported.
The goal is to ”implement the accord signed in December 2007 on the common patrolling along the Libyan coasts,” the Minister had said. The problem of the illegal immigration coming from the coasts of Libya is a strong conflict issue between Italy and the North African country. The agreement signed in December by Rome and Tripoli envisages mainly common patrols to fight against the trafficking of illegal immigrants.
However, it has remained only on paper, while thousands of illegal immigrants continue going from the Libyan coasts to Europe. Italy and Libya have been negotiating for years a possible agreement on the compensations which Rome owes for the colonial period. The agreement should include the realisation, promised by Berlusconi himself in 2004, of a coast motorway across all over Libya, from the borders with Tunisia to the ones with Egypt, for some 3 billion euro.

I can hear laughter coming from the Gaddafi tent, all the way to Finland. *L* KGS